27th Ramazan and the Creation of Pakistan – Part I

The following is a concise English translation of renowned bureaucrat Dr. Safdar Mehmood’s column titled “Sataesween Ramazan aur Qayam-e-Pakistan”, published in Jang newspaper on August 14, 2015. ****** When Mustafa Ali Hamdani announced “This is Radio Pakistan” at 12:01 am, it was as if the centuries-old dream of Muslims culminated into reality. This dream, a glimpse of which is found in the writings of Shah Waliullah two centuries ago, is

27th Ramazan and the Creation of Pakistan – Part II

The following is a concise English translation of renowned bureaucrat Dr. Safdar Mehmood’s column titled “Sataesween Ramazan aur Qayam-e-Pakistan”, published in Jang newspaper on August 16, 2015 (continued from the previous part). ****** He (my spiritual teacher) said, “Today is the last Friday of Ramazan, a blessed day. Prostrate before Allah in gratitude and offer prayers to make Pakistan a great empire”. In a special session of Pakistan’s first Constituent

On August 16, 2015, Pakistan lost one of its finest sons of the soil. Punjab Home Minister Colonel (retd) Shuja Khanzada Shaheed was an epitome of courage, determination, perseverance, operational vision and bravery. A third generation scion of a family with a legacy of serving in the army, he belonged to the Shadi Khan village of Attock. It was this very location where he was targeted by a suicide bomber

The following is a concise English translation of Urdu excerpts from a book called ‘Seerat Un Nabi (SAW) Baad Az Wisaal Un Nabi (Part 4)’ authored by the late Mr. Abdul Majeed Siddiqui. ****** Quaid-e-Azam sent one of his closest associates to Hijaz (area of present-day Saudi Arabia which contains the two holiest sites of Islam i.e. Makkah and Madinah) on a special mission; this particular associate was specially involved

Why do foreign powers want control of Balochistan?

Balochistan is the largest province of Pakistan and ironically one with the least inhabitants. With a combined area of approximately 347,000 square kilometres, it is home to deserts, coastal belts, plateaus, mountains and oases littered across the vast expanse of mud, sand and hot air. The tribes which live here have been part of this land for thousands of years, wandering here and there as nomads. There are hundreds of 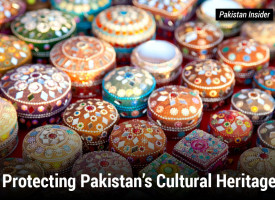 Pakistan is home to four provinces (Punjab, Balochistan, Sindh and KP) and three autonomous zones (FATA, Gilgit-Baltistan (GB) and Azad Kashmir). Living in these areas are people belonging to hundreds of tribes/clans and thousands of sub-communities. Most, if not all, have their distinct socio-cultural identity which accords them special historical importance. From the mountains of Chitral to the deserts of Balochistan, from the plains of Punjab to the coastline in

The following is a concise English translation of Urdu excerpts from a book called ‘Shajar Haye Saaya Daar’. The author, Syeda Humera Maududi, is daughter of the world renowned late Muslim scholar Syed Abul Aa’la Maududi. ****** In 1978, I (Humera Maududi) had returned to Lahore from Jeddah to spend summer vacations with my family when this strange incident occurred: It so happened that after Maghrib prayers, two Squadron Leaders

In-Service Indian Colonel’s Suggestions on How To Destabilize Pakistan

Colonel Kirit K. Nair is an in-service (serving) officer in the Indian Army. He was commissioned to 1 Sikh Light Infantry in March 1992. He has served extensively in Counter Insurgency (COIN) operations in occupied Jammu & Kashmir and Assam. He is currently on Study Leave for a post graduate degree program. In early 2015, Nair published a paper for Indian Army’s Centre for Land Warfare Studies (CLAWS) titled ‘India’s

Pakistan Is A Divine Commandment

The following is a concise English translation of an Urdu column by Allama Abul Imtiaz Ain Seen Muslim for Daily Nawa-i-Waqt dated January 21, 2012. ****** There is sufficient evidence to prove that Pakistan owes its very existence to Divine Commandment. That 15 million Muslims from oppressed Muslim societies in India united together on one platform raising one demand (attaining Pakistan) is proof enough that Allah wants to employ Pakistan

The following is a concise English translation of excerpts from a book titled ‘Seerat-Un-Nabi (SAW) Baad Az Wisaal-Un-Nabi SAW – Part 7′ authored by Abdul Majeed Siddiqui. ****** A few days after the creation of Pakistan, Syed Safdar Ali Ahmed saw a dream in which an innocent boy named ‘Pakistan’ is standing in a saint’s presence wearing shiny white clothes. He continued narrating his dream: “It came to my knowledge