We’ve seen a lot of advances in the last ten years, most notably how the Web has influenced communication. Some of the things we use today and couldn’t imagine living without didn’t even exist just a few years back. So let’s take a look at ten of the biggest technology startups of the last decade.

Most companies on this list are related to the huge growth in social media. Are we heading for a burst in a Web technology bubble? Remember that these are just ten examples. And by “biggest” we’re looking at things like audience recognition in addition to simply the money they bring in (as newer companies would clearly be at a disadvantage in a decade-long list). There are countless other technology companies that are equally worth mentioning. If you can think of other great tech companies that launched between 2001 and 2011, please be sure to mention them in the comments. The following examples are listed in alphabetical order.

Background: Despite all the more decent cries that “Digg is dead” you can’t deny the important role Digg has played in the social media world over the last several years. They were a huge part of the content aggregation movement. They did this by allowing users to submit stories from around the Web, aggregating the best based on users’ opinions all in one place.

Background: Love it or hate it, you have to acknowledge the impact Mark Zuckerberg’s social network has had over the last few years. Not only did it grow social networking as a communication platform but also injected itself into areas like online advertising based on the massive amount of personal user data the site is able to collect.

Background: Foursquare is probably the best known social networking tool based on geolocation. The service lets users “check in” to different locations, letting members of their online networks know where they are. Foursquare has also been incorporated into local-level marketing, as companies begin to know more about where their customers are and when they frequent their establishments.

Background: Groupon helped revolutionize the way companies could reach out to targeted customers online, while letting customers exercise their mass influence to get businesses to cut the service’s users incredible deals. It took online coupons to an entirely new level and is still a hot trend in social media with other companies like LivingSocial also involved.

Background: Hulu was one of the first reliable online video services that allowed users to watch legal versions of movies and their favorite shows online, and it targets a U.S. audience. The number of offerings has grown quite a lot over the few years it’s been around, and now they also offer a premium service with even more content available for online viewing. Hulu was offering these shows well before some of the networks had their own reliable on-site video streaming setups. 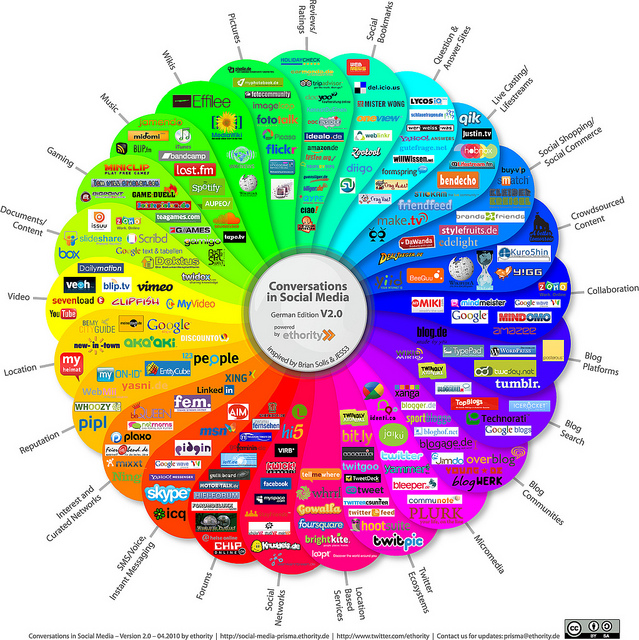 Look at many of the other advances in social media in recent years. – Credit: birgerking (via Flickr)

Background: LinkedIn is one of the best known niche social networks. The site successfully focuses on business networking, giving it a much more professional reputation than other social networks currently around. It’s popular both for job-hunting and hiring as well as its question and answer features.

Background: Years ago Skype hit the market giving people a better (and free) way to enjoy voice-based chats without using a telephone. This was especially nice for those individuals who wanted to keep in touch over long distances or even internationally. Skype has since grown quite a bit with special Skype phones for a more traditional talking experience and paid services that enable users to call the phones of those who don’t use Skype themselves directly through the Skype service (to save money).

Background: Tesla is our one tech company on this list that isn’t Web-based. Instead they’re an automotive manufacturer focused on electric cars. What makes them truly notable is their Roadster — the first electric sports car in serial production.

Background: Twitter may have had a bigger influence on how people communicate than any other recent technology. The 140 character limit to tweets (the short messages posted to the service) force people to be concise, while also oddly encouraging people to share random blurbs of information that might not otherwise come up in conversation (like what you’re eating for lunch, at the very moment you’re eating lunch). It’s like instant messaging to the masses.

Background: YouTube feels like it’s been around forever. Before it came along, how did we ever get our fix of cute little videos of kitties doing the darnedest things? We may think of YouTube as just another Google property these days, but it actually launched as its own entity only six years ago. My, how time flies when you’re having fun.

Which of these tech companies interests you the most? Which play the biggest roles in your day to day life, if any? What other tech startups have influenced you in the last decade? Leave a comment below to share your thoughts and suggestions for other technology companies worth taking a look at.