The United States and Pakistan have a strong relationship based on a mutual commitment to security and stability.  Esperanza Gomez of the United States-Pakistan Business Council says, “Pakistan and the United States are natural trade and investment partners.”  She notes that the U.S. is Pakistan’s top trade partner and largest customer.

The U.S. Commercial Service in Pakistan is responsible for U.S. export development activities and provides services to the U.S. businesses.  The U.S. Commercial Service offers many trade promotion services to both American and Pakistani companies, with specialists that provide valuable marketing intelligence– enabling profitable business in Pakistan.

Currently there are more than 60 firms registered with the American Business Council (ABC) of Pakistan.  The ABC acts as the American Chamber of Commerce for U.S. businesses in Pakistan, which include Citibank, Procter & Gamble, Merck, Pepsi-Cola, Coca-Cola, and Microsoft.  An additional 15 to 20 companies operate through their franchises or local partners, such as McDonald’s.  Members of the ABC play an important role in Pakistan’s economy, with cumulative annual revenues around $2 billion.

The U.S. established diplomatic relations with Pakistan on October 20, 1947, and began providing economic and military assistance.  Pakistan valued the strength given by Americans and in return offered partnership with the U.S. in the Baghdad pact.  In 1981, the U.S. and Pakistan agreed on a $3.2 billion military and economic assistance program aimed at helping Pakistan deal with the heightened threat to security and its economic development needs.

Issues have arrived throughout the years that have threatened peaceful relations between the U.S. and Pakistan, but once Pakistan agreed to support the U.S. campaign to eliminate the Taliban in Afghanistan and to join the U.S. in efforts against terrorism, the relationship has been strengthened.  Since September 2001, Pakistan has provided extensive assistance in counterterrorism efforts by capturing more than 600 al-Qaida members and their allies. In turn, the United States has increased its economic assistance to Pakistan, providing debt relief and support for a major effort for education reform. 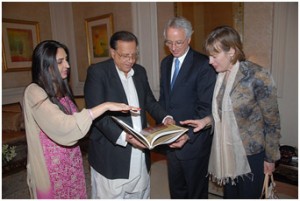 Following the country’s tragic earthquake in October 2008, the U.S. responded immediately to Pakistan’s call for assistance.  In November, the U.S. announced a $510 million commitment to Pakistan for earthquake relief and reconstruction, including humanitarian assistance, military support, and private contributions.

The Barack Obama administration has reaffirmed a U.S. strategic partnership with Pakistan.  In October 2009, the U.S. Congress passed the Kerry-Lugar-Berman legislation to authorize $1.5 billion in non-military assistance to Pakistan annually for 5 years.  Pakistan has set goals for making progress in the implementation of a tax system and energy financing reforms, improving quality of and access to education, and working towards technological advances.  A letter of intent was also signed to upgrade major road infrastructure in northwest Pakistan, as well as implementation agreements for three thermal power station rehabilitation projects that will aid in combating electricity shortages within the country.

Pakistan is country bursting with economic potential.  Although false rumors, terrorist attacks, and unstable conditions may threaten the alliance between the U.S. and Pakistan, both nations are hopeful for a continued peaceful relationship.