Pakistani theatre, film and television actor, model and director Hamza Ali Abbasi’s Facebook account is deactivated after he voiced his opinion in favor of Kashmiri rebel leader, Burhan Wani. Moreover, his FB in which he talked about Kashmir has been taken down.

Hamza Ali Abbasi had talked about Burhan Wani in his post (which is now removed). He said that the assassinated leader was neither an ISI agent neither a militant. He is Burhan Wani Shaheed (Martyred) who had joined the rebellion after his brother was killed by Indian army.

This is what Hamza Ali Abbasi tweeted 23 hours ago:

“Shabaash Facebook. Day 10 of Indian crufew in Kashmir, more than 60 martyred & we cant talk about it. My FB accnt deactivated for talking abt KASHMIR #Kashmir #FreeKashmir #RIPFreedomOfExpression” 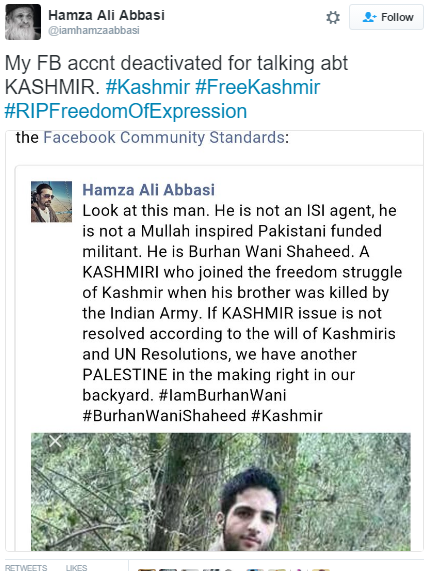 Hamza Ali Abbasi is not the only one whose post has been taken down. Facebook has been accused of taking down content posted by Kashmiris as well regarding unfortunate events in the region. Even some prominent voices were temporarily blocked and had their posts taken down by Facebook ‘for violating community standards.’

Earlier in 2015, Facebook management decided to take down a post by Hamza Ali Abbasi after the attack in Paris. However, Facebook’s founder Mark Zukerberg had issued a rare apology for their ‘accidental mistake’ later.

In his latest interview today to HIP, the actor was furious at the move made by the social media platform. He made sure to continue his support to Kashmiris as soon as he gets his account reactivated. He commented:

“I just think for an organisation which claims to bear the flag of freedom of expression, this is sheer hypocrisy. I will keep raising my voice for our Kashmiri brothers and sisters, that is If i get access to my account again”

When asked if he is looking forward to contact Mark Zuckerbeg, he stated:

“I will keep raising Kashmir issue rather than waste my time on trying to talk to Zuckerberg. They made this platform; they can have policies of their choice. And as long as I have access to their platform, I too will keep using it to raise issues like Kashmir.”