The basis of Pakistani cuisine comes from the spreading of the Islam religion, starting in 700 A.D.  The arrival of Islam within South Asia greatly influenced local cuisine.  Since Muslims (who practice the Islam religion) are forbidden to eat pork or consume alcohol, Pakistanis focus on other areas of food such as chicken, lamb, beef, fish, vegetables, fruit, and dairy.

Pakistani cuisine is well-known for its richness and flavor.  Preferences vary from region to region, and are dictated in part by local produce.  Cuisine in Pakistan is not as hot as in India, but still reflects the Moghul influence.  Spices are used liberally to enhance flavor, but not to disguise the original taste.  Common spices are chili powder, cardamom, nutmeg, mace, saffron or turmeric, curry, cloves, garlic, coriander, and bay leaves.  Ready-made masalas – mixed and ready to use spices, are becoming increasingly popular. 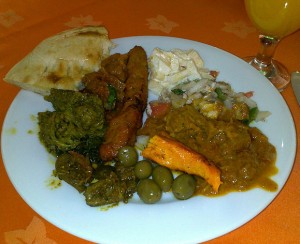 Lunch at a Pakistani Restaurant by jadijadi via Flickr

A typical Pakistani breakfast usually consists of eggs, a slice of loaf bread or roti, parathas (Indian flat-bread), qeema (minced meat), fresh seasonal fruit (apples, melons, mangoes and bananas), shami kebab (a popular snack of minced meat and ground chickpeas), and nuts.  The first meal of the day may also include baked goods like bakarkhani (layered bread) and rusks (dry biscuit).  Common favorites in Punjab are khatchapuri, a flavorful pastry filled with cheese, and maaki ki roti, or cornbread.  In most regions, breakfast is generally quite a feast due to the high level of physical activity required of the workers.

Lunch may include meat curries or lentils along with bread, rice, and vegetables.  A popular dish is aloo gosht – meat and potato curry.  People living by rivers may also eat fish for lunch, often cooked in the tandoori style.

Typically, dinner is considered the main meal of the day, with the entire family gathering together.  Depending on the region, lentils and rice may be the staple, or other foods requiring more preparation like pulao, kebabs, kofte or keema.  Dessert can range from seasonal fruit to kheer, shahi tukray, ras malai, or gajraila – all traditional Pakistani sweets.

Pakistan is a major exporter and consumer of rice, with Basmati as the most popular.  Kebabs are also a staple of Pakistani cuisine, with countless varieties in each region.  Biryani is another common dish in Pakistan, and has many variations including Lahori, Sindhi, and Tahiri – a vegetarian version.  All of the main dishes are eaten with bread, which is used to scoop up the food.  Pickles made from mangoes, carrots and lemon are often used to spice up the meal.

To sample Pakistani cuisine, take a trip to Food Street in Gawalmandi, Lahore.  The food street is open to traffic in the morning, but gets blocked off at sunset.  All the best local food available can be tried and tasted here, with experienced chefs preparing the best of what Pakistan has to offer.