If you’ve ever been to Interior Sindh by road you must have seen a number of green topped masjids/mausoleums lining the road.

I remember the first time I visited the interior by road. It was an official trip and I had a friend with me. He too was on his first road trip to the interior of Sindh. Believe you me we couldn’t keep count of the baba’s, fakir’s, pir’s, etc. There was also a parrot baba! Can you believe that? A Parrot baba! I wonder what he did that was so great? Maybe he could recite a surah of the Qur’an or something…

Not just about Dressing up and Dancing

All this might sound very funny and foreign, but it’s actually not. The pir/baba (etc.) business thrives just as much in our cities. Again, this might not sound bad to a lot of us. After all, it’s a free world and if one wants to go to someone for spiritual healing why shouldn’t they?

At the same time, I’m sure you know that many of these spiritual healers take advantage of people. There have been cases of some so called pir’s raping innocent girls, minting money from poor down-trodden families and even murder in some cases.

The Secret to the Pir’s Attraction 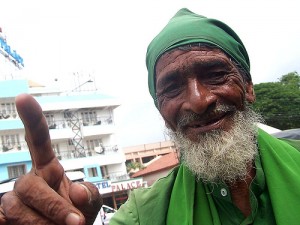 So why do people go to these pirs? Imagine if you will the following: you earn around Rs. 3000/ a month, have a large family, can’t make ends meet and see your malnourished children and family facing a slow death in front of your very eyes, everyday. Oh, and don’t forget that you’re uneducated and know little about your religion.

If you are a normal human being, with human emotions, you’d probably do anything to save yourself and your loved ones. And this is where the scam begins. Some pir’s take full advantage of such people’s helplessness.

Next question: but can’t they see that their daughter is getting raped? When an illiterate girl is given to such people by her own mother and father what is she supposed to think? Other than this being the right thing or the will of god.

Some of these scams have been exposed by our media. I remember a hidden camera program a news channel did some time ago to make people aware of this gruesome by true reality.

Recently however, this piri-fakiri, has taken an interesting twist. I don’t know about other cities, but in Karachi a mutation of these pir’s has emerged in recent times. This new breed doesn’t have their own green-topped masjid or green flag, but their “advisory” is usually run from their own homes. I’m not sure if they charge a fee but people usually give them some for their services. And they claim to have inherited these powers.

One woman related the following experience to me:

“the moment I stepped into the room that he was sitting in he looked at me and said,

‘From the moment you parked downstairs I knew a very disturbed (“parayshaan”) woman is coming to see me’. He then narrated some things that happened to me in my recent past and said that I had the nazar of two women and one man upon my house, which is the cause of all my problems. He then handed me some Quranic verses to recite daily and I said goodbye”

Sounds harmless right? Just some Qur’anic verses in the end can’t be that bad. But think about this in the long run; the power, the money, and – worst of all – the blind following this person can garner over time. This is what starts the piri/fakiri legacy.

My humble advice, it is Allah we should look towards when we are in a fix. It is He who tries us with these problems and He alone has the power to make them go away.

The beautiful thing about Islam is that it has liberated man from serving other men; there is no priest-class in Islam or clerical order.  Man can call upon God directly without any intermediaries.  Think about it, if Allah fulfills the needs of the insects and animals when they call upon Him, why should He require human beings – the most honorable creation – to seek intermediaries with Him?  Does it make sense?

The first step is very simple: know your religion and put your trust in Allah. No pir/fakir will be able to make a fool out of you and take advantage of your problems if you do this.