The London-based human rights body stated that 10 countries (Jordan, Turkey, Pakistan, Lebanon, Iran, Ethopia, Kenya, Uganda, Democratic Republic of Congo and Chad) host than 50% of the 21 million refugees in the world. The collective GDP of aforementioned countries is mere 2.5%. 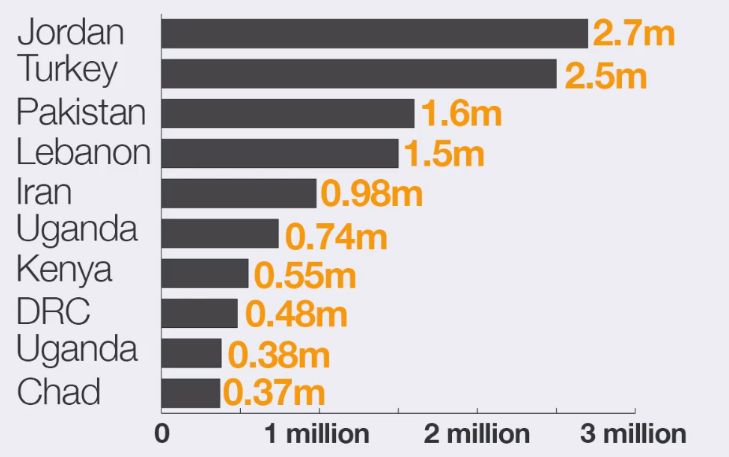 According to the data, 56% of the world’s refugees are being protected in the 10 countries. The human rights body also proposed a solution whereby the world’s countries find a home for 10% of the planet’s refugees every year.

While presenting the report titled ‘tackling the global refugee crisis: from shirking to sharing responsibility’, the Secretary General of Amnesty Salil Shetty stated:

In another revelation made by Oxfam International, it was reported that the six most richest and developed countries including China, France, Germany, Japan, USA and UK host less than 9% asylum seekers in their countries.

These aforementioned countries account for more than 50% of the world’s economy and despite that these nations took 2.1 million refugees and asylum seekers in their country during 2015 which makes only 8.88% of the total in the world.

The report of Amnesty stated:

“It is not simply a matter of sending aid money. Rich countries cannot pay to keep people ‘over there’. The ‘self-interest’ of such countries meant the international refugee crisis was set to get worse, not better”

While shedding light on the matter, Salil Shetty said:

“If every one of the wealthiest countries in the world were to take in refugees in proportion to their size, wealth and unemployment rate, finding a home for more of the world’s refugees would be an eminently solvable challenge”

“That situation is inherently unsustainable, exposing the millions fleeing war and persecution in countries like Syria, South Sudan, Afghanistan, and Iraq to intolerable misery and suffering. It is time for leaders to enter into a serious, constructive debate about how our societies are going to help people forced to leave their homes by war and persecution”

The statistics are based on figures from the United Nations High Commissioner for Refugees.