It was one of the golden periods of Islamic history when the Islamic empire stretched from the Mediterranean Sea to India, under the rule of the Abbasids.  Baghdad was the world’s center of learning during this era. The House of Wisdom in Baghdad was the stage where a famous Muslim scholar was engaged in translating all the known Greek scientific works of the time into Arabic.  He was to become known as the Father of Algebra and his name was Abu Jaffar Mohammad Ibn Musa al-Khwarizmi.  He is considered to be one of the most influential mathematicians in history.

Very little is known with certainty about his early life.  He was born possibly in 780 CE to a Persian family living in Khwarizm situated in Khorasan, which was a part of the Persian Empire.  He worked under the patronage of the Abbasside caliph Al Mamun.  His illustrious life concluded in 840 CE or 850 CE. 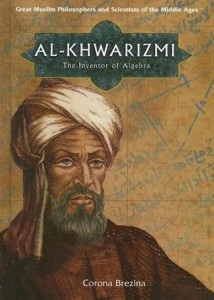 His most famous and and most influential work was Al-Kitab al-mukhtasar fi hisab al-jabr wa’l-muqabala (The Compendious Book on Calculation by Completion and Balancing).  The book was written around 830 CE under the patronage of Caliph Al Mamun.  Since this book discusses algebra, you would expect it to be filled with fearsome mathematical notations but interestingly, it is not.  The notations that we are used to seeing in our books, were not invented yet so Al Khwarizmi used text to explain the algebraic problems.  In this book he tried to solve everyday problems with the use of algebra.

Al Khwarizmi made contributions in various fields of science including Mathematics, Astronomy and Geography.

Hindu numeral system: One of his most important contributions was to recognize and propagate the importance of Hindu numerals from 1-9.  He combined it with 0, which was developed by the Arabs and it was called the Hindu-Arab numeral system.  The introduction of zero was a revolutionary concept, which changed the future of mathematics and many other fields of science.

Astronomy: Al Khwarizmi left a considerable amount of work on astronomy.  His works include calendars, calculations of the positions of celestial bodies such as sun, moon and various planets, calculations of sines and tangents, astrological tables, etc.  He expounded extensively on the works of ancient Indian astronomers.

Geography: He performed very influential and extensive research on geography.  His major contribution was correcting and improving Ptolemy’s work based on his own findings.  He worked with a team of geographers to create a map of the known world.  He presented locations (latitude and longitude) of over 2000 cities, oceans, mountains and other places in the world at the time.  Another work by him involved degree measurements to find the circumference and volume of Earth, which was commissioned by the caliph Mamun.

Al Khwarizmi’s books were taught in the universities of the Arab world as well as throughout Europe till the sixteenth century.  Some of his famous books include:

“That fondness for science, … that affability and condescension which God shows to the learned, that promptitude with which he protects and supports them in the elucidation of obscurities and in the removal of difficulties, has encouraged me to compose a short work on calculating by al-jabr and al-muqabala , confining it to what is easiest and most useful in arithmetic.” Al-Khwarizmi (Source)