This year has been great for Pakistan as far as International Competitions and science projects are concerned as a number of students from across the country bring home the accolades in fields ranging from debates and film-making to math Olympiads and scientific research. Here’s a quick list of the events: 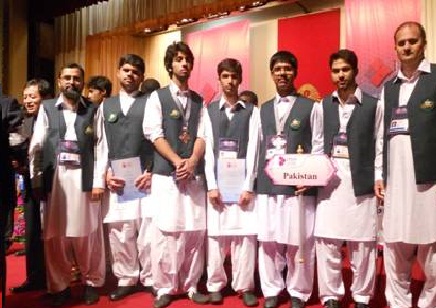 The team from Pakistan brought home silver, four bronze medals and two honorable mentions after competing with 236 students from around 59 countries in the International Science Olympiads 2012 held in the month of July in USA, Singapore, Argentina and Estonia. The four to six-member teams were selected out of 6,000 students and participated in the science categories hosted by the different countries before receiving the prizes.  Syed Waqar Ali Shah bagged the silver in Math while Usama Zaid Malik, Azlan Shaukat, Huma Sibghat and Dilsher Ahmad won bronze.

The Pakistani team sweeped the competition by winning the final against South Korea and having all three members listed in the top 10 speakers of the tournament.  Before securing the championship, the 15-year-olds went through 6 preliminary rounds, 3 elimination rounds and then the grand finale. Zainab Hameed was named the top speaker of the competition while Azeem Liaquat stood second and Ahmed Shujaan landed fifth position among the 200 participants from 45 countries.

A matric student from Khairpur, Shadab Rasool, was awarded a scholarship worth $250,000 by the US State University of New York for his research pertaining to Bio Chemicals which will help enable the recycling of industrial waste.

Shadab collected some used tea, washed it with boiled water until it was decolorized and then dried it. He then proceeded to test it with substances like cadmium, lead, nickel and phenol commonly found in industrial effluent before the impartial judges in the USA. A check with a spectrophotometer revealed no traces of these chemicals after an hour, proving his research.

A student film production concerning US drone attacks in Pakistan won the Best Audience Award at the international annual film festival held in the USA.  NFFTY considers work by filmmakers aged 22 and under from all over the world and the 20-minute film “The Other Side” is written and directed by Danish Ali and his five-member team.  The short film explores the social, psychological and economic effects of drones in the northwest tribal areas of Pakistan.

M. Ubaidullah, a 9th grader, bagged gold medal after competing with students from 45 countries presenting 150 projects in Turkmenistan. His winning project was a plant automation system and was awarded the gold medal in the hardware category. The project P-Bot powers itself by solar cells and helps in automatically protecting plants in all weather conditions by virtue of its cold-flame and greenhouse setting.

Moosa Feroze stood first in the 11-13 year old age category at the International World Math’s Day Competition held in Sydney, Australia. 5.5 million students of 52,805 schools from more than 200 countries participated in the competition.

Three Pakistani students made it to the Isef finals held in Pittsburg from May 13 to May 18 while two of the five finalists failed to obtain a visa.

Syed Shahzeb spent eight months on his project titled “Production of Artificial Magnetic Domains in Non-Metals.” According to him, electricity could be produced more cheaply if nonmetals were used and that was the driving force behind his research.

Of the team of three girls, only two could make it to America. Mahnoor Hassan, Shiza Ghulab and Bushra Shahed’s project “Energy Square for Cattle” is designed to facilitate care for animals in time of calamities. The squares are a dry mix of nutrients and ingredients such as mulberry, wheat, maize, rice polish, urea and calcium and have no expiry date. Also, according to the presenters, after just 28 days a few licks of the concoction had helped control diseases, enhance milk production and increase weight in the cattle they conducted their tests on.