Since the military operation – code named Zarb-e-Azb – began, more than 350,000 people have left North Waziristan as per the FATA Disaster Management Authority.

As the operation continues the IDP situation has gotten worse. The refugees are pouring into Bannu, Peshawar and Kohat and it is estimated that around 4,000 families have crossed into Afghanistan. This exodus is not likely to stop soon as the operation is still ongoing.

It is not easy to handle an IDP situation for any country. The resources that are required and the management of the camps is a huge challenge.

A major concern is that Pakistan’s nascent government is just about a year old and is already fighting on so many fronts. The government and institutions clearly lack the capacity and means to sustain the IDPs, especially in Ramadan.

The provincial government however has claimed to have released approximately PKR 350 million for relief efforts and a Ramadan package has also been announced for the IDPs. Mobile SIMs have also been promised to the IDPs. In addition to this, all the hospitals in the area have declared an emergency and the IDPs are being provided free transport and schooling.

The government has for now banned international aid organizations from entering the area of conflict. This is definitely due to security concerns but it may not be a very practical decision.

Despite the ban there are still certain NGOs that are doing a great job of helping out. Organizations such as CDRS Pakistan are at the forefront and doing all they can to help to handle the situation.

Another important action taken by the government is that arrangements have been made to administer the polio vaccine at all border check points. This is mandatory and anyone refusing it is being turned away. This could be a very positive step, I since approximately 70 cases of polio were reported in North Waziristan this year alone.

The Sindh government however, has said that it will not open its borders for the IDPs. This is likely in order to curtail the entry of terrorists into Karachi and also to prevent the spread of Polio outside of KPK.

Can this initiative also be a success?

Very few people know that the IDP issue emanating from the Swat crisis was an international success story. This gives us hope that this new but similar crisis can also be handled successfully, otherwise we may have another crisis where the camps may end up becoming breeding grounds for terrorism; exactly what the army is trying to prevent in North Waziristan. 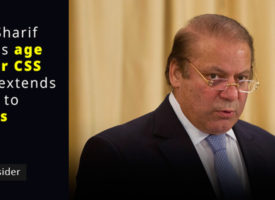