“All I was thinking was that I had to detonate myself near as many people as possible. When I decided it was the right time, it was a moment of happiness for me,” chilling words from a 14 year old suicide bomber who was involved in a suicide attack in the first week of April 2011, at the Sakhi Sarwar shrine in Punjab.  This attack killed at least 41 people and injured several others.

The last decade of Pakistan’s history has witnessed some of the worst bloodshed due to the rise of suicide bombings all across the country.  From a few isolated incidents in the 80s and 90s, suicide bombings have become the weapon of choice for extremist groups.  The suicide attacks have been progressively increasing in numbers and ferocity since 2001.  One look at the number of attacks and the resulting casualties makes us realize that the monster unleashed in the name of various geopolitical agendas has turned on us in the worst way.  The table below shows the number of suicide attacks and the resulting deaths since 2001.

The targets of these attacks initially were security forces and government establishment, but over time this has become a ‘nothing is off-limits’ game.  The suicide bombers have been attacking shops, mosques, funeral processions, shrines, educational institutions and several other ‘soft’ targets.  The army and law-enforcement personnel are no longer the only casualties; it now includes women, children, and elderly as well.  Suicide bombings have historically been used as a means to resist foreign military occupation, but this is not the case in Pakistan because there is no direct military occupation.  The targets of the bombings are mostly state authorities, US interests and religious/sectarian.  The operation in Lal Masjid was the turning point for these bombings because after that the extremists came down hard on the state and the military operation in the tribal areas of Waziristan and Swat only escalated it. 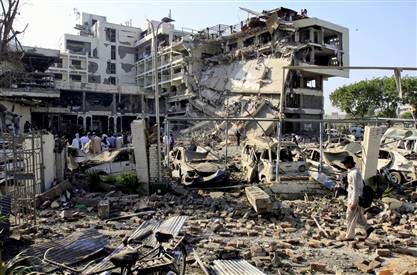 What Drives the Suicide Bombers?

Suicide bombing is one of the ugliest and the most menacing forms of terrorism plaguing Pakistan.  The person blowing himself up is merely a tool and it is not possible to devise a fool-proof mechanism to foil every suicide bombing attempt.  Clearly identifying the factors that make the bomber commit this heinous act is the key to uprooting this evil.  Many reasons and explanations have been put forth by government officials, law enforcement personnel, academics and other sections of the society.  Without a doubt, it is a very complex issue which has its roots in a number of factors including religious extremism, foreign intervention, political instability, economic conditions, poverty, etc.  Several studies have identified that the youth of the tribal areas from where most suicide bombers are recruited, are driven by a set of factors including hatred of government policies, lack of education, unemployment and the severe lack of basic amenities.

Religious extremism is cited as one of the primary reasons for the rise of terrorism, especially suicide bombings in Pakistan.  It is true to some extent that the distorted religious information fed to the impressionable recruits helps in motivating and recruiting the suicide bombers, but beyond that, social and cultural factors also play an important part in the decision of the recruit to commit for the gruesome task.  There are several other factors also at play, such as:

What can be done to stop these heinous acts?

The Pakistani government has been trying hard to curb terrorism in general and suicide bombings specifically, but the increase in the frequency and ferocity of these acts clearly indicates that the efforts of the government are falling short.  In order to effectively address this problem the government needs to take some of the following steps: