Hamza claimed in a Facebook post that he has been issued a legal notice by Govt of Royal Sharif Family.

Punjab Law Minister Rana Sanaullah while talking to a private news channel confirmed the development. He said that Punjab government sent notices to everyone who was involved in spreading untrue information on social media. The minister questioned the credibility of the news by asking:

“Where did Hamza Ali Abbasi get the information from? This is not prosecution. He should apologize that his sources were not credible”

According to the notice, which was served by the provincial government’s public prosecution department, the number of missing children quoted by Hamza is incorrect and it is actually less than one third to what he reported. Moreover, the notification claimed that Hamza’s post ‘was exaggerated and it created a sense of insecurity in the general public.’

Pakistani actor is served legal notice because of updating the following status on 3rd August 2016: 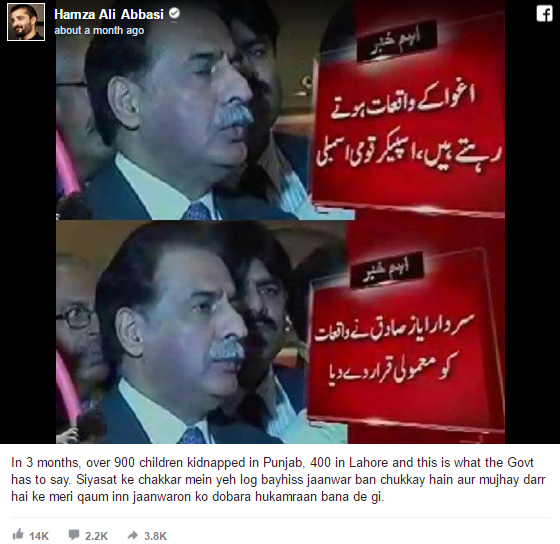 In reply to the notice, Hamza stated that he was specifically being targeted by PML-N government. In addition, he also made it clear that he obtained the information from media houses and various other news platforms. As a result, he provided all the links in his Facebook post to prove his stance.

While talking in a talk show, Hamza stated:

“The notice must be served to the news outlets as well. I, as a Pakistani, say that these politicians are as insensitive like animals”

Furthermore, he questioned the authorities that if the news and information provided in the web links was true, why he was being questioned. He also added:

Senior leader of Pakistan Tehreek-i-Insaf (PTI), Shafqat Mehmood allegedly stated that Hamza is subject to such harsh treatment only because he is a PTI supporter. Additionally, he went on to say that nobody should be served legal notices for their Tweets and WhatsApp messages. He ended his statement by stating:

Do you think government is right in serving these legal notices on the basis of Facebook posts and WhatsApp messages?