27th Ramazan and the Creation of Pakistan – Part I

When Mustafa Ali Hamdani announced “This is Radio Pakistan” at 12:01 am, it was as if the centuries-old dream of Muslims culminated into reality. This dream, a glimpse of which is found in the writings of Shah Waliullah two centuries ago, is mapped in Allama Iqbal’s address of 1930. Professor Masud Ul Hassan was a recognized scholar. In his English-language book titled ‘Hazrat Daata Ganj Bakhsh’ (saint Ali Hujweri), he writes that, “I came to Lahore in 1930 and booked residence near the shrine of Daata Ganj Bakhsh. In those days, Allama Iqbal often used to visit the shrine of Daata Ganj Bakhsh before Fajr prayer, where we both used to meet. I did some work for him in English, as per his wish, and also helped him write a few speeches including the address of Allahabad.” Professor Masud Ul Hassan writes that, “Upon my inquiry, Allama Iqbal told me that he conceived the idea of a separate homeland for Muslims during worship at the shrine of Daata Gang Bakhsh”. What’s amusing is that an English author Evelyn Wrench wrote in his book ‘Immortal Years’, “I asked Jinnah when was the first time he conceived the idea of Pakistan and when this concept emerged in his mind. Jinnah’s straightforward reply was ‘In 1930’.”

This shows that both Allama Iqbal and Quaid-e-Azam first conceived the idea of Pakistan in the year 1930. Obviously, this idea back then hadn’t yet taken the name of Pakistan, this is why for them it was simply the idea of a separate homeland for Muslims. When Pakistan emerged on the world map between 14 and 15 August, its first Independence Day was celebrated on August 15, 1947; the 27th Ramazan, Friday and also Laylatul Qadr. The following year, in July 1948 before Independence Day celebrations, it was decided that Pakistan’s Independence Day would be celebrated each year on August 14.

India celebrates its Independence Day each year on August 15; perhaps Pakistan’s leaders wanted to keep their Independence Day celebrations separate from them because Lord Mountbatten was to take charge as Governor General of India on August 15. This is why he came to Karachi on August 14 and announced transfer of power on behalf of the British government before the Constituent Assembly. Here, Pakistan had the option to opt for August 14 as its Independence Day. This date was suggested by Prime Minister Liaquat Ali Khan, which was duly approved by Governor General Muhammad Ali Jinnah. I had seen this record many years ago; respected Mr. Aqeel Abbas Jafri even published a copy of this letter in a famous newspaper on August 14, 2011.

It should now be clear that Pakistan came into being on Friday, the 27th of Ramazan; it was a very blessed night. This honor will stay till eternity because the decision to observe August 14 as Independence Day was passed later. 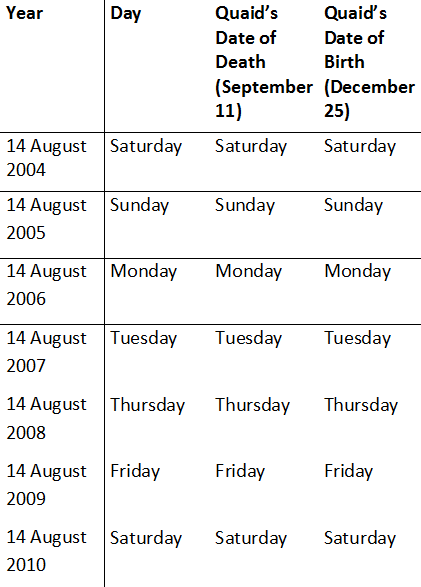 Is it pure coincidence or nature’s grand design? I can’t say anything with certainty. I have merely shared an interesting fact with you. This trend can be observed after Quaid-e-Azam’s death on September 11, 1948 and will continue like this until Pakistan remains. If you wish to deduce something from this, please do so.

One of my spiritual teachers used to say that Allah’s Shadow is on Pakistan, which came into being on 27th Ramazan, Laylatul Qadar. When we asked why Pakistan broke in 1971, he replied it was the result of our own wrongdoings and bad intentions. The law of nature does not grip an oppressor’s hand, neither does it snatch the sword from a killer, otherwise the innocents martyred in Karbala wouldn’t have been butchered. They (martyrs of Karbala) were beloved to Allah and His Prophet (Peace and Blessings of Allah Be Upon Him). Allah is Potent over everything. He could have blinded the killers if He Willed, but this never happened. Although those wrongdoers will be cursed till the Day of Judgment and Imam Hussain’s martyrdom will be observed with solemnity. East Pakistan’s separation was the result of our mistakes but do focus on nature’s revenge; all three leaders who broke away East Pakistan died extraordinary deaths; furthermore, each of their male offspring also became victims of unnatural deaths. The fourth military personality died facing hatred during captivity on August 9, 1980. The army General-cum-Governor NWFP (KP) who buried him with full military honors also got killed; this is why this decision could not be investigated.

My spiritual teacher used to say that many countries were dismembered; Gorbachev broke Russia into bits and pieces but none of them were hanged, no one received punishment. Leaders of three different countries were responsible for dismembering Pakistan and they all suffered a similar fate. Why so? We could have called it a ‘coincidence’ if this happened only in Pakistan or only in Bangladesh or only in India; but the three of them suffering the same end points towards signs of nature’s revenge. Then he (my spiritual teacher) used to take a deep breath and exclaim, “My dear, whoever shows disloyalty to this country will face embarrassment and devastation, and whoever serves it with good intentions will emerge victorious in both worlds (here and hereafter)!”

We got this country ready-made, that’s why we cannot realize how much struggle, efforts and sacrifices were rendered to obtain it. When Radio Pakistan started broadcasting on August 15 at 8:00 am, selected verses of Surah Aal-e-Imran were recited followed by the Quaid-e-Azam’s message. Quaid-e-Azam congratulated the citizens of Pakistan and made them aware about their responsibilities towards the newly-created state.