5 Reasons Why Pathankot Attack Appears To Be An Inside Job

On January 2, 2016, a group of 5 heavily-armed terrorists attacked the Indian Air Force (IAF) base in Pathankot, Punjab, killing 7 security personnel including a serving Lt Col of the Indian Army.

India’s hyper-sensationalist media once again jumped to conclusions, with each news outlet quoting its own ‘high ranking’ anonymous sources giving their own differing versions of the incident. Some said it was carried out by Jaish-e-Muhammad (JeM) whereas some alleged it was another attack by Lashkar-e-Taiba (LeT). To sum it up, India’s leading print and electronic news outlets pinned the blame on archrival Pakistan.

However, as serious analysts argue, Pakistan had more to lose by allegedly sponsoring such an attack. I present 5 main arguments which I believe to be reasons enough to suggest that the attack ran contrary to Pakistan’s interests. On the other hand, it might be that the Indian establishment by itself or standalone players in India must have executed it.

Critics of Pakistan Army and its security agencies had accused them of orchestrating the dreadful 26/11 Mumbai attacks several years ago by saying they were meant to attack the economic/entertainment hub of India, with the aim to leave a lasting psychological impact. The attack had also embarrassed India’s weak protective measures to ensure the safety of foreigners in their country, especially the Israelis with whom India has cordial relations.

The attack in Pathankot, the second such incident after the earlier attack in Gurdaspur, is in Indian Punjab which borders Pakistan. For the latter to choose such a close location from the border would be plain idiotic. After all, Pakistan’s harshest critics have repeatedly accused the military establishment of being very meticulous in their planning. Hence the notion that India perhaps improved its coastal security to force alleged Pakistani terrorists to strike in Punjab does not make sense. On the contrary, an attack near the international border between both countries would have had severely negative implications for Pakistan’s image as a country serious in cleaning up its own mess. The Indian media thus far seems to have successfully enforced this misperception.

Secondly, Pakistan is trying its best to alleviate security concerns of its minority Sikh community. Thousands of Sikh ‘yatris’ (religious travelers) visit Pakistan each year for celebrating the birth of their saints in Nankana Sahib, etc. Religious tourism is among the last remaining sources of income for Pakistan in war. To suggest that Pakistan would intentionally risk earning the ire and frustration of the Sikh community would be irrational. Punjab provinces on both sides of the international border (Pakistan and India) are centres of agriculture and industries.

Lastly, India has long accused Pakistan’s ISI of sponsoring the Khalistan separatist movement. New Delhi will have to either drop charges against Pakistan for supporting the Khalistan movement or brush aside accusations of involvement of attacks in Punjab because the latter will clearly spoil Pakistan’s alleged relations with Khalistani activists.

The IAF has 16 air bases in its Western Air Command, 5 of which are situated in Punjab (Adampur, Amritsar, Bhisiana, Halwara and Pathankot). Pathankot base is home to No. 108 “Hawkeyes” Squadron (18 Wing) comprising MiG-21s and the No. 26 “Warriors” Squadron comprising Su-7s and MiG-21s. All these aircraft are very old and of little strategic value, if we are to suppose Pakistan wanted to target them.

On the other hand, choosing a more resourceful air base to target, say for example Adampur air base, would have been somewhat sensible, since it comprises of No. 47 “Black Archers” Squadron and No. 223 “Tridents” Squadron. They both have high-performance MiG-29Bs which are capable of countering F-16 Falcons, which Pakistan has an abundance of. 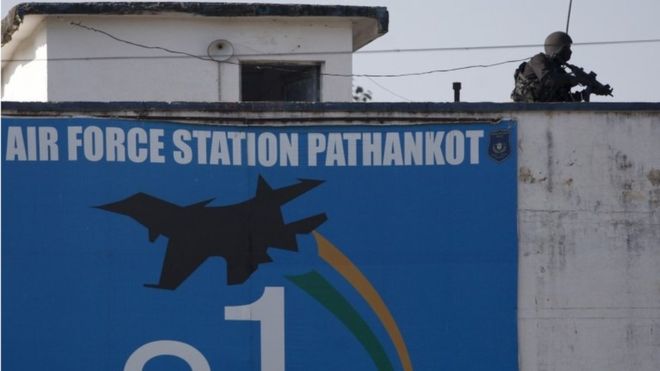 If we are indeed to believe that Pakistan allegedly chose a target near itself for easy hit-and-run missions (which wasn’t the case, since the attackers cared little for their lives), another more feasible option would have been to target the Bhisiana Air Force Station near Bhatinda. IAF authorities had announced in July 2015 that they were planning to station Airborne Early Warning and Control Systems (AEW&CS) developed by the Defence Research & Development Organization (DRDO). It would make this only the second such base with Intelligence, Surveillance and Reconnaissance (ISR) aircraft after the air base in Agra (Central Air Command).

From a purely military perspective, Pathankot air base is quite frankly a low-value target for Pakistan. Alternatively, the Pathankot attack will actually justify IAF’s request to expand its strength in the Western Air Command. Perhaps in the near future the IAF might deploy a horde of UAV squadrons along the Indian Punjab border.

3. Advance knowledge of the attack

Barkha Dutt, a senior Indian journalist and Consulting Editor with NDTV, had posted a tweet containing the copy of an intelligence alert issued by Punjab Police as early as December 31, 2015. The alert had warned that LeT was (allegedly) planning to carry out “a spectacular attack in India possibly on New Year celebrations”. The alert notified of around 15 armed militants who would attack “Govt. establishments”, among other high-profile targets.

The question that comes to mind is this: Knowing well how seriously India takes LeT (Hafiz Saeed is known to be India’s enemy number one), why did the Punjab Police not take directives for precautionary security measures seriously?

Here I would also like to include contents of an email communication between Lt Gen (Retd) H S Panag, former Indian Army head in Northern Command and Maj Gen (Retd) Pradyot S Mallick, formerly of National Defence College. The contents were published after the former’s prior approval. Some notable extracts are as follows (quoting Gen Panag):

Doval held a conference on 01 January at 1500 hrs, also attended by Chief Of Army Staff. Air Base assessed as the target. All warned. Battery NSG despatched to Pathankot Air Base. Special Forces team flown in and put in location at Mamun.

No lead agency or overall Commamder appointed. Unless Doval felt he can control the events. Area in vicinity of base not combed. Public not informed. Failure of Pathankot Police and possibly Indian Army if they were tasked at all. If GOC 29 Division was in charge, it would have been done. Preventive Security of Air Base not beefed up. Given the size, an Infantry Battalion should have manned the perimeter and patrolled the wall from outside also.

Despite the 24 hr warning 5-8(?) terrorists scaled the wall and entered the Adm Area and attacked the DSC Mess where men were unarmed despite warning. 5 men lost.

Response of NSG and Garuds- the lesser said the better.

Panag concluded: “It is better to shame ourselves in public to force reforms rather than do nothing!”

In view of the above, should we really be gullible enough to accept that the Indian forces were unprepared to defend the base? Despite advanced security threat alerts and orders to beef up security, why were orders not materialized for preventing such an incident? One would be naïve in saying that India was confused because it was definitely in the loop of all ongoing developments. Furthermore, such a province which was already attacked last year and which borders an arch nemesis could not have been possibly left in the lurch except, of course, if it was an inside job.

Pakistani and Indian National Security Advisers (NSAs) had already met in Bangkok prior to Indian External Affairs Minister Sushma Swaraj’s scheduled visit and Prime Minister Modi’s surprise stopover. NSAs along with their respective delegations had agreed that dialogue was the only way forward. Bear in mind that Ajit Doval is Modi’s right-hand man in all matters related to security whereas Lt Gen (Retd) Nasser Khan Janjua is a recently-retired Pakistan Army General close to both the current army chief General Raheel Sharif and Prime Minister Muhammad Nawaz Sharif.

Reuters had quoted an unnamed senior Indian official that General Raheel Sharif was also supportive of Pakistan’s comprehensive talks with India to resolve disputed issues. In light of these reports, why would Pakistan’s military establishment hammer its own feet and put its credibility at stake? US Secretary of State John Kerry said his country strongly favors resumption of talks between both nuclear-armed countries.

The reasons for this apparent change in attitudes should be understood. Even Ajit Doval recently clarified that he never announced cancellation of the upcoming Foreign Secretary-level talks, but that matters would be taken forward only if Pakistan acted on leads provided by India. Now even if the talks are held in a cordial setting, the symbolic damage has been done; Pakistan was once again brought to the limelight as a country with an alleged routine of provoking its neighbors and India ‘looking forward’ as a supposedly mature state (the war of superior state diplomacy).

Zee News reported on January 8 that an employee of the Indian Army’s Military and Engineering Services (MES) was arrested, suspected of aiding the attackers as 3 floodlights in the base were found turned upward. Similarly, it was reported on January 11 that arms and ammunition used by miscreants during the attack was smuggled in advance by insiders at the base. Superintendent of Police (SP) Gurdaspur district Salwinder Singh is being interrogated by National Investigation Agency (NIA) for his conflicting statements pertaining to his mysterious absence during the attack

5 Reasons Why Pakistan Should Recognize And Hold Dialogue With Israel

Provisions of the Protection of Pakistan Bill 2014