Have you ever wondered why the publication of anti-Pakistan books has become a major growth industry today? The answer is simple: Authors and publishers of books about Pakistan know where the money is. It’s in India where the book sales are rising rapidly in the midst of continuing global decline. Strong profit motive drives them to write what Indians want to read. Those, like Professor Wendy Doniger of University of Chicago, who ignore this reality are punished by having their books withdrawn and pulped. No publisher wants to take this risk now. And authors who wish to get published have to understand it too.

India’s English language book market is the world’s third largest, behind that of the United States at the top and of the United Kingdom at number 2.  It is the fastest growing market today which will make India the world’s number 1 market in the next ten years.  It could happen sooner if the book sales in the US and the UK decline faster or those in India grow more rapidly than they are already.

The best way to understand the Indian narrative about Pakistan today is to read “The Warrior State: Pakistan in the Contemporary World” by Canada’s McGill University Professor Thazha Varkey Paul, a graduate of India’s Jawaharlal Nehru University, who describes Pakistan as a “warrior state” and a “conspicuous failure”. It is among a slew of recently published anti-Pakistan books by mainly Indian and western authors which paint Pakistan as a rogue state which deserves to be condemned, isolated and sanctioned by the international community.  Others, including Christine Fair and Husain Haqqani have also used the same narrative to get a lot of buzz and sell books in India and the West.

C. Christine Fair is an assistant professor in the Center for Peace and Security Studies (CPASS), within Georgetown University’s Edmund A. Walsh School of Foreign Service. She has only recently wised up to the opportunity to sell lots of books in India.

Before writing and promoting “Fighting to the End: The Pakistan Army’s Way of War”, an anti-Pakistan book, American analyst and author Christine Fair said this in 2009: “Having visited the Indian mission in Zahedan, Iran, I can assure you they are not issuing visas as the main activity! Moreover, India has run operations from its mission in Mazar (through which it supported the Northern Alliance) and is likely doing so from the other consulates it has reopened in Jalalabad and Qandahar along the border. Indian officials have told me privately that they are pumping money into Baluchistan”.

Husain Haqqani, former Pakistani ambassador to US, has been the darling of India and the West since the publication of his book “Pakistan: Between Mosque and Military” in 2005. He has recently followed it up with another Pakistan-bashing book “Magnificent Delusions” in which he accuses Pakistan of lying and playing a double-game with the West.

Washington Post’s Richard Lieby’s review summed up the book in the following words: “Read his book and you might think Husain Haqqani, Pakistan’s ambassador to Washington from 2008 to 2011, is no friend of his homeland. Its leaders are liars, double-dealers and shakedown artists, he says. They have been this way for decades, and, as Haqqani ably documents, the United States often has served as Pakistan’s willing dupe. But for all its criticism of Pakistan, “Magnificent Delusions”is a necessary prescriptive: If there’s any hope of salvaging what seems like a doomed relationship, it helps to know how everything went so wrong. Haqqani is here to tell us.”

If one really analyses Haqqani’s narrative, one has to conclude that Pakistanis are extraordinarily clever in deceiving the United States and its highly sophisticated policymakers who have been taken for a ride by Pakistanis for over 6 decades. It raises the following questions:

Question 1: Given the belief that Pakistan would not survive, how did the country defy such expectations? What role did its “villainous” military play in its political and economic survival? What does the history say about rapid economic development of Pakistan under military regimes?

Question 2: Wouldn’t any country that suffered a military invasion by its much larger neighbor and its break-up be justified in feeling threatened? Wouldn’t such a country build deterrence against further adventures by its bigger neighbor?

Question 3:  If the standard western narrative is correct, why have successive US administrations been so naive and gullible as to be duped by Pakistan’s politicians and generals for such a long period of time? Is it not an indictment of all US administrations from Harry S. Truman’s to Barack H. Obama’s?

Question 5:  What price has Pakistan paid for facilitating US military operations in Afghanistan? How many Pakistani soldiers and civilians have lost their lives since 911?

TV Paul describes Pakistan as a “warrior state” and a “conspicuous failure”. Is it really?

Let’s do a point-by-point examination of Paul’s narrative:

1. Paul argues: Seemingly from its birth, Pakistan has teetered on the brink of becoming a failed state.

In 1947 at the time of independence, Pakistan was described as a “Nissen hut or a tent” by British Viceroy of India Lord Mountbatten in a conversation with Jawarhar Lal Nehru. However, Pakistan defied this expectation that it would not survive as an independent nation and the partition of India would be quickly reversed. Pakistan not only survived but thrived with its economic growth rate easily exceeding the “Hindu growth rate” in India for most of its history.

Even now when the economic growth rate has considerably slowed, Pakistan has lower levels of poverty and hunger than its neighbor India, according UNDP and IFPRI. The key reason for lower poverty in Pakistan is its per capita value added in agriculture which is twice that of India. Agriculture employs 40% of Pakistanis and 60% of Indians. The poor state of rural India can be gauged by the fact that an Indian farmer commits suicide every 30 minutes.

2. Paul: Its economy is as dysfunctional as its political system is corrupt; both rely heavily on international aid for their existence.

The fact is that foreign to aid to Pakistan has been declining as a percentage of its GDP since 1960s when it reached a peak of 11% of GDP in 1963. Today, foreign aid makes up less than 2% of its GDP of $240 billion.

The Taliban “occupy” a small part of FATA called North Waziristan which is about 4,700 sq kilometers, about 0.5% of its 796,000 sq kilometers area. Talking about insurgents “occupying” territory, about 40% of Indian territory is held by Maoist insurgents in the “red corridor” in Central India, according to Indian security analyst Bharat Verma.

4. Paul: It possesses over a hundred nuclear weapons that could easily fall into terrorists’ hands.

5. Paul: Why, in an era when countries across the developing world are experiencing impressive economic growth and building democratic institutions, has Pakistan been such a conspicuous failure?

Pakistan’s nominal GDP has quadrupled from $60 billion in 2000 to $240 billion now. Along with total GDP, Pakistan’s GDP per capita has also grown significantly over the years, from about $500 in Year 2000 to $1000 per person in 2007 on President Musharraf’s watch, elevating it from a low-income to a middle-income country in the last decade.I wouldn’t call that a failure.

Goldman Sachs’ Jim O’Neill, the economist who coined BRIC, has put Pakistan among the Next 11 group in terms of growth in the next several decades.

6. Paul argues that the “geostrategic curse”–akin to the “resource curse” that plagues oil-rich autocracies–is at the root of Pakistan’s unique inability to progress. Since its founding in 1947, Pakistan has been at the center of major geopolitical struggles: the US-Soviet rivalry, the conflict with India, and most recently the post 9/11 wars.

Pakistan is no more a warrior state that many others in the world. It spends no more than 3.5% of its GDP on defense, lower than most of the nations of the world.

7. Paul says: No matter how ineffective the regime is, massive foreign aid keeps pouring in from major powers and their allies with a stake in the region.The reliability of such aid defuses any pressure on political elites to launch the far-reaching domestic reforms necessary to promote sustained growth, higher standards of living, and more stable democratic institutions.

8. Paul: Excessive war-making efforts have drained Pakistan’s limited economic resources without making the country safer or more stable. Indeed, despite the regime’s emphasis on security, the country continues to be beset by widespread violence and terrorism. 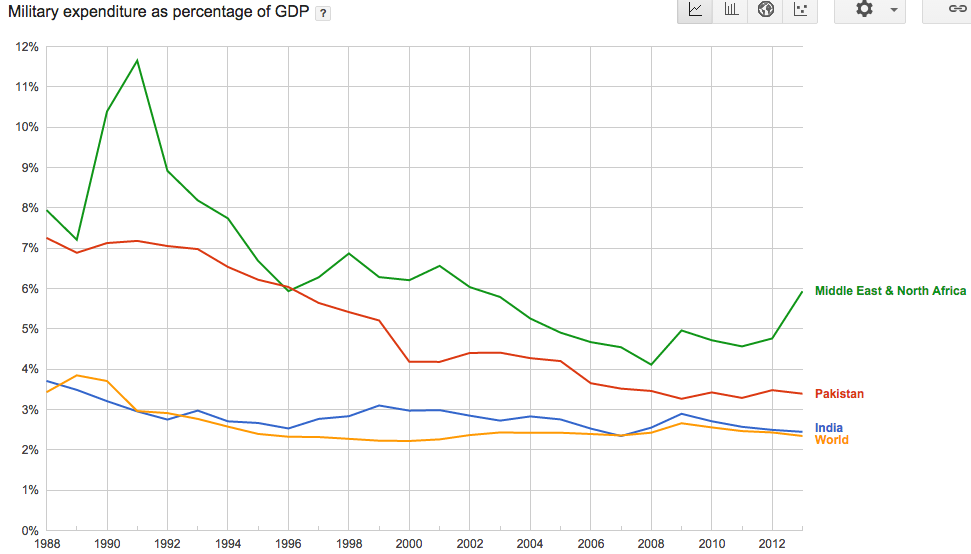 In spite of declining military spending which is just 3.5% of its GDP now which is average for its size, Pakistan has achieved strategic parity with India by developing nuclear weapons. It has since prevented India from invading Pakistan as it did in 1971 to break up the country. Pakistani military has shown in Swat in 2009 that it is quite capable of dealing with insurgents when ordered to do so by the civilian govt. 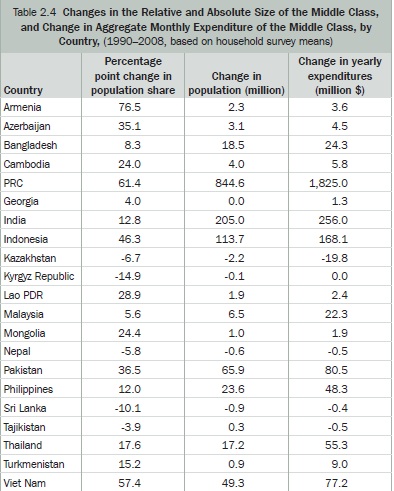 Pakistan has not lived up to its potential when compared with other US Cold War allies in East and Southeast Asia, it is wrong to describe it as “conspicuous failure”. Pakistan should be compared with other countries in South Asia region, not East Asia or Southeast Asia. Comparison with its South Asian neighbors India and Bangladesh shows that an average Pakistani is less poor, less hungry and more upwardly mobile, according to credible data from multiple independent sources.

Pakistan is neither a “warrior state” nor a “conspicuous failure” as argued by Professor TV Paul. To the contrary, it has been the victim of the invading Indian Army in 1971 which cut off  its eastern wing. Pakistan has built a minimum nuclear deterrent in response to India’s development of a nuclear arsenal. Pakistan has responded to the 1971 trauma by ensuring that such a tragedy does not happen again, particularly through a foreign invasion.

Pakistan is a complex country. It is much more upwardly mobile than many of its neighbors, including India.  While the country is suffering growing pains like any other developing nation, the false narrative of exaggeration of its difficulties being promoted by a flurry of books bashing Pakistan is driven more by desire for commerce than by serious academic search for truth. Assertions made in such books fall apart when subjected to the close scrutiny that I have done in this post.

Today, Pakistan faces some of the toughest challenges of its existence. It has to deal with the Taliban insurgency and a weak economy. It has to solve its deepening energy crisis. It has to address growing water scarcity. While I believe Pakistanis are a very resilient and determined people, the difficult challenges they face will test them, particularly their leaders who have been falling short of their expectations in recent years.

The Role of Religion in the State Affairs of Pakistan

It’s Almost Election Time – Who do I Vote For?