Pakistan Armed Forces are fighting an “amorphous” enemy, as former army chief General Kayani used to say. This enemy manifests itself in various forms, at various places and through a variety of mediums. Operation Zarb-e-Azb will complete its second year in coming June and the National Action Plan (NAP) promulgated by the political-military leaders will also complete its second year in December.

A key question being asked by observers, analysts and critics since the past few months is: How much progress has NAP really made? Answering this will prove a bit cumbersome as various sections of the state apparatus are responsible for individually or jointly fulfilling the 20 points mentioned in NAP. The Prime Minister himself admitted last year in September that major portions of the plan are yet to be implemented. And now the fingers of frustration are being raised in the wake of the attack on Bacha Khan University, Charsadda.

I had previously argued that the military components of NAP were being diligently implemented but key portions pertaining to the civilian setup (federal political regime and bureaucracy) have not been achieved, for unknown reasons. Let us look at the following civilian components of NAP and the progress made therein:

Point 3: Militant outfits and armed gangs will not be allowed to operate in the country.

Comment: The Ministry of Interior might have issued some circulars in this regard but there are still large groups of sub-nationalist, religious/sectarian and ethnic groups which roam around in violation of government orders. For example arms possessed by Sindh and Punjab-based political parties, armed guards of blacklisted sectarian groups and gang war mafias in Lyari, etc.

Point 4: NACTA, the anti-terrorism institution will be strengthened.

Comment: The Prime Minister had appointed Ihsan Ghani PSP as the National Coordinator for National Counter Terrorism Authority (NACTA) in August 2015. It was reported post Bacha Khan University attack that Mr Ghani had written letters to all civilian/military security agencies to nominate a representative each for stationing at the proposed Joint Intelligence Directorate (as reported by 92 News HD). What response it received is unknown but what we do know is that agencies have their own interests to protect and are not comfortable in sharing their intelligence with others (turf wars). It is also a fact that NACTA has been extremely short of required funds, I repeat, required funds. Sparing a meagre few billions isn’t going to help because an even greater problem, and somewhat related, is the lack of adequate human resource to make NACTA a fully functional body. The ridiculous fact is that a lot of prospective candidates who wanted to join NACTA were caught cheating in exams. It was reported that NACTA was supposed to be situated within the Prime Minister’s Office (PMO) but even this can’t be verified. There seems to be a discomforting or rather criminal silence around the workings of NACTA.

Comment: Although some attempts have been made in this regard, they are negligible, to say the least. Perhaps the biggest tools at the disposal of terrorists are print publications (magazines, books, leaflets, CDs, mobile clips, etc) to promote their violent extremist ideologies centred around hate and incitement to terror. Blacklisted sectarian organizations seem to face no obstacles despite the fact that NAP has been enforced for more than a year. Such material lures further potential recruits for militants against rival groups or the state itself. In both cases, their ‘propaganda limbs’ must be chopped off before more damage is done. The Ministry of Interior is responsible for ensuring that federal and provincial police forces effectively prevent such content from being publicized.

Comment: The Ministry of Finance is responsible for the overall blockage of funds used by political, religious and ethnic outfits for terrorism. These efforts will not only require a thorough nationwide effort via the Federal Board of Revenue (FBR), etc but also through coordination with the Ministry of Interior (FIA) and Ministry of Foreign Affairs (MoFA) to keep tabs on hundi transfers and foreign transactions, respectively.

Comment: The Ministry of Interior had to ensure that blacklisted organizations do not change their names and branding for re-emergence but so far it has failed to properly curtail such attempts. Sectarian organizations with ties to Saudi Arabia and Iran are especially active on this front (and, unfortunately, they have succeeded thus far). 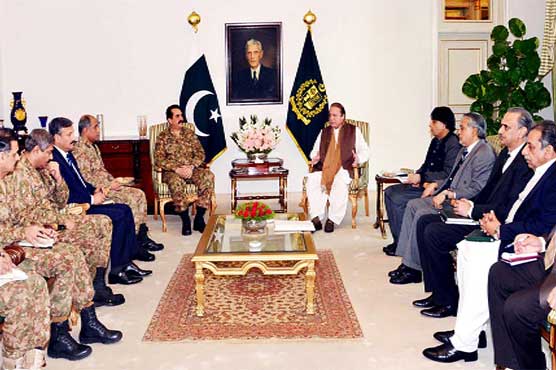 Comment: All four provinces have working Counter Terrorism Departments (CTDs) attached to police units in volatile regions with KP and Punjab leading the rest. The performance in Balochistan is poor because a major burden of operations is still handled by paramilitary forces such as the Frontier Corps (FC). These are basically provincial units attached to the respective police forces; there is no dedicated federal (national) counter terrorism task force so far. The establishment of such an agency would help share the immense burden on Pakistan Army’s shoulders.

Comment: Minority religious communities in Pakistan particularly Shias, Ahmadis and Hindus feel they are being persecuted by the state either directly or indirectly because of their unwillingness to confront the religious clergy who issue fatwas (religious edicts) which legitimize their killing.

Comment: The Ministry of Interior and Ministry of Religious Affairs in conjunction with MoFA should have developed a joint coordination mechanism to work on this critical aspect but the severe resistance from the religious establishment didn’t let the concerned quarters make any considerable progress, despite their good intentions. Geo-tagging of all madrassahs is still pending including the gathering of essentials details of persons who operate these seminaries.

Point 11: Ban on glorification of terrorists and terrorist organizations through print and electronic media.

Comment: Although not openly, there are still a few columnists, news anchors and clerics who express their sympathies for terrorists and terrorist organizations. This is most prominent in the vernacular Urdu press and media. On the other hand, there are hundreds and thousands of Facebook pages, Twitter handles and forums, etc which glorify terrorism. This responsibility should be shared between the Ministry of Information & Broadcasting and Ministry of Interior.

Point 12: Administrative and development reforms in FATA with immediate focus on repatriation of IDPs.

Comment: The federal government in Islamabad has lost its credibility in the eyes of Temporarily Displaced Persons (TDPs) who were forced to migrant during the launch of Operation Zarb-e-Azb. Development projects for rehabilitation and restoration of infrastructure are still stuck in the pipeline because those entrusted with billions in funding have either spent the money for personal use (corruption) or diverted them elsewhere (some say the money spent on extremely expensive projects like Metro Bus, etc was more than enough to restore FATA to its pre-war condition). There is growing discontent among people of tribal areas, especially their elders, who consider the lack of attention to their problems as proof of the state’s insincerity. The responsibility in this regard falls primarily under the ambit of Ministry of Planning, Development & Reforms and the Ministry of Finance. The former seems to be more focused on China-Pakistan Economic Corridor (CPEC) than improving an existing crisis.

Point 14: Measures against abuse of internet and social media for terrorism.

Comment: This falls under the primary ambit of the Ministry of IT & Telecommunication (MoITT). Dangerous Facebook pages, Twitter handles, blogs and forums by terrorists are still accessible for the ordinary public through various ISPs.

Comment: The irony is that Punjab has not faced military operations as have other provinces, particularly KP and Balochistan. South Punjab is known as the hotbed of sectarian terrorism and extremism but so far only limited and covert Intelligence-Based Operations (IBOs) have been carried out in Punjab. Punjab Law Minister Rana Sanaullah had earlier ruled out an operation in South Punjab and just this week dismissed plans for a Rangers-led operation in the province. The exemption for Punjab has led to disarray among other provinces who accuse Punjab of being given preferential treatment. The assassination of Punjab Home Minister Colonel (Retd) Shuja Khanzada Shaheed delivered a severe blow to counter terror operations in the province. Months after this martyrdom, no replacement has yet been appointed.

Point 16: Ongoing operation in Karachi will be taken to its logical end.

Comment: The federal government in Islamabad (Ministry of Interior) and provincial government of Sindh in Karachi (Home Ministry) have failed to remove distrust among them. As a result, after every 90 days, Sindh Rangers are forced to wait for both administrative capitals to sort out their differences and then extend their operational mandate again. This childish display of non-seriousness and failure to implement long-term measures speaks volumes for itself.

Point 19: Formulation of a comprehensive policy to deal with the issue of Afghan refugees, beginning with registration of all refugees.

Comment: Afghan refugees have caused more problems for Pakistan instead of trying to integrate within the national fabric. Most Afghans are recruited as spies by the National Directorate of Security (NDS), Afghanistan’s intelligence service, or participate in criminal activities involving drugs and narcotics. This crucial component is a shared responsibility of the Ministry of States and Frontier Regions (SAFRON) and the National Database and Registration Authority (NADRA) which operates under the Ministry of Interior. The revelations that NADRA officials took bribes to issue national identity cards to Afghans, among other illegal foreigners, raised several question marks on efforts to register Afghans.

Comment: As far as available media reports are concerned, there is no evidence that any mentionable efforts were undertaken to at least start a review of the flawed justice system in Pakistan. The Ministry of Law and Justice has failed to constitute a panel to revise and reform the criminal and prosecution laws in Pakistan for swift delivery of justice.

It is clear that 15 out of the 20 points of NAP are the primary responsibilities of civilian government organs. The following ministries have failed to make any meaningful and effective progress:

It is not a surprise that a Corps Commanders Conference in November 2015 had expressed “concern” over “lack of governance” on the part of the ruling administration. On February 1, 2016, the Prime Minister held a meeting with senior civil and military officials including the Army and ISI chiefs. Prominent news analysts quoted their sources saying that slow progress on the civilian government’s efforts to implement NAP was among the hot issues of discussion.

One is forced to wonder: Is the government really that incompetent or criminally insincere in realizing NAP’s objectives on war footing?