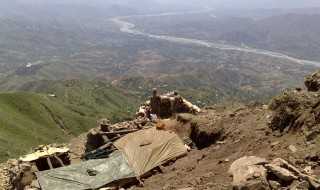 After years of deliberation our armed forces have finally moved into the hot bed of ‘terrorism’ in Pakistan, Miranshah in North Waziristan.

Miranshah has long served as the center of control for the terrorists and is believed to be the last major militant sanctuary in the border region.

Foot soldiers moved into the city a couple of days ago from a nearby garrison after the place was leveled by two weeks of aerial bombardment only to discover a few militants, some tunnels and a few IED (improvised explosive devices) factories.

But absolutely nothing on leaders from the Pakistani Taliban (TTP), the Haqqani network, the foreign fighters or the native Waziristan-based militant groups.

This is because it is believed that these fighters have already left the region and moved to into Afghanistan’s Khost province. Terrorists have traditionally enjoyed sanctuaries in Khost and Pakistan’s tribal district of Kurram.

In addition to this, the Taliban that are native to Waziristan and their allies from Afghanistan also enjoy freedom in Waziristan neighboring south and west of Miranshah. These terrorists are armed and just as dangerous but the consolation here is that their leaders have not voiced opposition to the Pakistani assault…Yet!

Pakistani troops also have no troops in Wana which is another sanctuary for these people.

So the question arises, what is going on? It looks like the ground offensive is happening when most of the adversaries have disappeared from the scene. It has always been in Pakistan’s interest to have some form of control on Afghanistan for various reasons especially so that India doesn’t use the country as a second front against Pakistan. These groups have come in handy in the past to do this. However today, as Pakistan has itself become a target for these groups, the Pakistani government would not want the Taliban to rise to power again in a post-Nato Afghanistan.

But these groups might not have lost their value altogether, which is why it is believed that the current operation is about pushing the militants into Afghanistan or scattering them across the countryside instead of completely eliminating them.

This has a two pronged advantage

Although it is too soon to gauge the effectiveness of the operation, we all hope that it achieves its objective of ridding Pakistan of terrorism.