Pak-India Ties: Is There A Light At The End Of The Tunnel?

The recent meeting between NSAs and Foreign Secretaries of nuclear-armed rivals Pakistan and India in Bangkok caught everyone by surprise. The timing of the meeting, which witnessed participation by other senior officials from both sides, is especially noteworthy. Less than a day after the meeting, it was announced that Indian External Affairs Minister Sushma Swaraj would be participating in the ‘Heart of Asia’ conference along with a delegation, beginning December 8.

A group photo released after the NSA-level talks in the Thai capital showed NSA Lt Gen (retd) Nasser Khan Janjua and Foreign Secretary Aizaz Ahmad Chaudhry heading the Pakistani side whereas the Indian delegation led by NSA Ajit Doval comprised of Foreign Secretary Subrahmanian Jaishankar and a rather stern looking ex-Indian Police Service (IPS) officer Syed Asif Ibrahim. Asif, who was once Modi’s pick for chief of Intelligence Bureau, was appointed as Special Envoy for Counter Terrorism in June of this year. Hence the presence of Foreign Secretaries and Asif (including unidentified individuals on the Pakistani side) make it clear that Kashmir was not the only pressing issue that was discussed; terrorism was also a major topic. 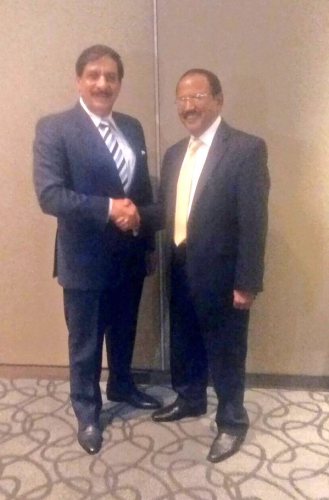 The grainy photo showing both NSAs sharing smiles after the meeting concluded is common diplomacy. It is reasonable to infer that nothing significant should be expected from these first round of talks but the good news, at least for Washington, is that the ice has been broken. The US and UK have in the past expressed particular concerns over the rising tensions which could lead to a standoff between the nuclear powers, something referred to as “escalating crisis” in strategic limbo.

There are two notable backdrops to this meeting:

Although the talks (probably) had nothing to do with nuclear ‘normalization’ or ‘Hindutva bigotry’, the recent spate of international media reports were making it difficult for Pakistan and India to remain incommunicado. Both countries have a host of pressing domestic concerns to sort out with increasingly vocal opposition parties that were tampering their image abroad. Washington has strategic partnerships with Islamabad and New Delhi and this delicate balance cannot be compromised because for the US, reliance on the former ensures a safe withdrawal from Afghanistan in the coming years whereas the latter is its ‘pivot’ to the Asia Pacific. Therefore, both countries were obliged to at least acknowledge their grievances and later devise viable solutions. The repeated violations by India along the Line of Control (with New Delhi pinning it on Rawalpindi) have also tarnished the symbolic ceasefire commitments.

There’s still a long way to go before the pre-Samjhauta or pre-Mumbai atmosphere can be revived but rest assured, both these neighbors will ultimately have to engage with each other being major immediate stakeholders in Afghanistan’s future.

But why was Bangkok chosen for the meeting, of all places? Reportedly, it was convenient for both parties as a neutral location, far away from the sensationalist media groups on either sides who would have traditionally generated unnecessary hype around the issue.

The Heart Of Asia-Istanbul Process initiative, which involves multiple stakeholders on developing a mutually-acceptable framework to restore peace and stability in Afghanistan, is underway in Islamabad. It will serve as a vital catalyst to provide a more open and congenial environment for participating countries to share their concerns and recommendations.

Indian External Affairs Minister Sushma Swaraj arrived in Islamabad on the night of December 8 and, while referring to Pakistan, said that efforts will be made “to improve bilateral relations”. Bear in mind this is the same Ms Swaraj who had earlier accused Pakistan of sponsoring “aatankvaad (terrorism)” in a fiery speech at the United Nations General Assembly in October this year. A press release issued by the Ministry of Foreign Affairs, Islamabad on the start of the first meeting of senior officials emphatically put forward Pakistan’s aspirations to take all regional stakeholders on board. India being a welcome participant goes to show Pakistan’s geostrategic maturity and, most importantly, sincerity.

On the contrary, India has acted like its usual self in the past by first calling off the earlier planned NSA talks in New Delhi and also sabotaging an MoU between the ISI and NDS. Even more so, despite evidence of India’s plans to degrade and discredit the China-Pak Economic Corridor (CPEC), Pakistan has shown its commitment to ensuring regional (eventually global) peace.

These initial steps, however small, have come about after a long gap. There’s still a long way to go before the pre-Samjhauta or pre-Mumbai atmosphere can be revived but rest assured, both these neighbors will ultimately have to engage with each other being major immediate stakeholders in Afghanistan’s future. Pakistan has direct security interests to protect whereas India has to protect Afghanistan’s geo-economic usefulness as a carrier into energy-rich Central Asia.

Regional geopolitics, thus, will ensure Islamabad and New Delhi keep their communication channels open. How beneficial this will be cannot be ascertained, as analysts on either side are cautious not to sound prematurely optimistic.