After almost a decade of terrorizing Americans with the notorious destruction of the World Trade Centre’s Twin Towers and constant threat of violence on American homeland with various suicide attacks, Osama bin Laden was bound to be a pester for any state to own his responsibility. Pakistan was unfortunate in this case too. The Saudis disowned him and the Muslims all around the world began to hate him for creating more havoc in the name of Islam used in vain and in utter opposition to the religion’s essence of peace and unity.

There are bound to be movies made on him as the subject and on the theme of terrorism effecting people’s lives everywhere. Hollywood was always expected to cash in on it, as it does with other war movies and with war heroes and villains alike. When it comes to this, Osama is no different and who else better to select for this task than to assign the project to Kathryn Bigelow, the Academy Award winning director, who made The Hurt Locker (2008). 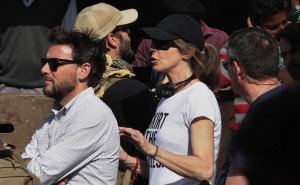 The theme of the Iraq War and the American soldiers’ tale of being embroiled in the land with their loved-ones away waiting for their return struck a chord with both the American movie-goers and more so with the critics who awarded the film overwhelmingly. Hence, Kathryn became a recognizable name amongst Hollywood directors. She made a record of being the first female director to win an Oscar, a strange fact that reflects upon the equality of women the U.S. preaches around the world.

Thus, within a week of Osama’s death, it was certain who will make the movie on the subject and who can make it profitably too. It was then revealed that Kathryn was already working on a script about hunting Osama. Now that even bigger an achievement came about of not just hunting him down, but eventually killing him through a secret operation of the U.S. Navy Seals on May 1, 2011, the script was altered and the movie became about getting rid of him.

There had been protests about the U.S. government sharing information with the filmmakers and not with the entire world and its own public who needed answers. But when those issues were forgotten, it was time to take the movie under-production. Since Pakistan does not have much support system for making movies on a high-scale, and more so there are high-security risks shooting a movie in Abbottabad which is still not cleared with the fumes of what occurred near the Army Garrison, the filmmakers were denied permission to shoot in the city. Also Osama’s compound was recently reduced to rumbles. 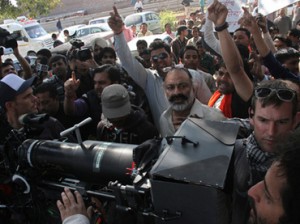 The only option left was to go to India to shoot the movie on Osama. But the right-wing extremist outfits of both Hindus and Muslims there will have none of it. Recently, there were protests by both Vishwa Hindu Parishad and Shiv Sena who questioned not much to the fact that a movie on Osama is being shot there as much as they disagreed with Pakistan being recreated for the production purposes on Indian soil in the city of Chandigarh which was made to resemble Abbottabad.

The Hindu extremist groups that always are ahead in anti-Pakistan stand for anything believe that it is a crime to even have a flag of Pakistan waving in India and to sing the neighbour’s national anthem, not to talk about recreating it for a film shoot. The extremists came in suddenly demanding the film to be stopped altogether, hurling abuses and manhandling the crew. The police did intervene on behalf of the cast and the crew, but the protesters persisted. They think that the Indian government should have not allowed the filmmakers such an “un-Indian” act in the first place. Kathryn assured them that Pakistan’s flag will not be displayed after which they left. Hence, no case was registered against them.

But such was not only the reaction from right-wing Hindus, but some Muslims also rallied against its filming in India. For them it was questionable to show Islam’s defamed image in their home country and to further aggravate tensions existing between both the communities. It is narrow-minded on part of those who are protesting as such. After all, it is just a movie set which has been made to appear as Pakistan. The film, still untitled, is expected to release later this year.