For more than a month Gaza has been subjected to the worst massacre ever, Pakistan has not done anything substantial. Although everyone especially women and youth are very active on various social networks. There is not any corporeal demonstration by the citizens of Pakistan.

The foreign office gave a formal statement, addressing Tel Aviv to halt its aggression against Palestine and condemning its actions. In past Pakistan has shown more concern and enthusiasm about various natural calamities and acts of aggression both on government and civil level. Whether, it was floods in Bangladesh, earth quakes in China, wars in Somalia and Yugoslavia and even American action against Iraq. The Prime Minister of Pakistan Nawaz Sharif on Tuesday 15th July, condemned the Israeli action and urged the Muslim leaders to stand up against the Israeli war crimes. He further blamed the intensity of violence on the ineffectiveness of leaders of Muslim Umah. Rightfully so, but the question is what has Pakistan done for the cause? Not in past only in recent conflict, not much. Not even close to what various parties like Respect Party, UK is doing for the Palestinian cause recently. Even the vocal, articulate Imran Khan who wears all his opinions on cuff waited for a while to make any kind of statement to condemn the Israeli insane massacre of Palestinians. He wrote a letter to UN secretary general, Ban Ki Mon, the letter was comprehensive drawing attention to genocide, war crimes, state aggression and responsibilities of UN. The enthusiasm he shows about criticizing present government is lacking in supporting Gaza. Had he called of a campaign to collect donation for Palestinians or a combined demonstration all over the country, everyone despite their political beliefs would have joined him.

Various political parties have staged protests against Israeli aggression but on small scale had they collaborated the impact would have been greater. On 14th July, PML-N along with, Khyber Sports Committee, Pakistan Youth Movement and PML (N) Minority wing protested in solidarity with Palestine in Peshawar. The protesters were demanding Israel to stop its genocide in Gaza. On 16th July, PPP held a protest in front of Karachi Press club. The participants were asking the PM to take apt action in favour of Gazan and demanding Israel to stop the atrocities. On 12th August, Jamaat-e- Islami organized a protest in Karachi in solidarity with Gaza. The demonstration was joined by hundreds of students from private and public schools and seminaries participated. The students were showing solidarity with Gaza and wanted an end to Israel’s insane violence. The protest should have been more organized and on a larger frequency. The Pakistani media has not given this issue the coverage it deserves.

In 1998, when Pakistan became the first Muslim nuclear power the Palestinians rejoiced and celebrated it as they did Saddam Hussain’s spud missiles few years earlier. In fact Hamas leader Sheik Ahmed Yassin, was the first one to welcome the success of Pakistan’s nuclear adventure. He believed that it was the Islamic bomb and would address the Israeli supremacy of being a nuclear power. He even thought that the stalled peace talk were because of Israeli nuclear attributes. Kamal Kharrazi, Iran’s foreign minister was the first one to visit Pakistan after the tests. He spoke on the behalf of more than 1 million Muslims, saying that it was a source of security for Muslim nations. It would not be wrong to say that Palestine looked up to Pakistan from the times of Yasir Arfat the iconic PLO leader.

Due to the socio-geographic position we occupy or our diplomatic skills, Pakistan was always considered to be one Muslim country that was considered important by all Islamic states. Maybe it was the ideology Pakistan was founded on; we always were there to initiate the Islamic cause. Pakistan has maintained excellent diplomatic ties with most countries yet never acknowledged Israel as a state. So for a country with such staunch beliefs the effort to support Gaza is simply not enough.

Pakistan at the moment is surrounded with its own domestic issues, so the focus is too inward looking. The army is engaged for over more than a decade with dealing Talibans, the issue of internally displaced people is huge, the energy crisis is mammoth, the opposition is giving government tough time from the day one. But there are certain issues that require aggressive immediate response preferably from both opposition and the ruling party; the insane massacre in Gaza is such an issue. As for the people of Pakistan they have simply forgotten about the esteem needs, they are so occupied either by social pressures or demands of daily life that they simply could not imagine the dire situation their brothers are in. Or maybe they have become insensitive and they can only think about their next vacation or designer outfit. Whatever it is I hope we rise to the occasion and revive our former glory as a resilient, conscious nation. What Palestinians teach us today; to live and to keep on believing in their ideology. 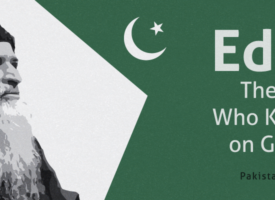 Edhi: The Man Who Keeps on Giving