The International Consortium of Investigative Journalists is about to unleash a huge data dump about how some of the world’s wealthiest and most powerful people hide their cash.

The group has already released a host of information regarding how major figures in politics and business store their wealth in tax havens.

On Wednesday the ICIJ said in an email that on May 9 it would “publish what will likely be the largest-ever release of information about secret offshore companies and the people behind them, based on data from the Panama Papers investigation.

“The searchable database will include information about more than 200,000 companies, trusts, foundations, and funds incorporated in 21 tax havens, from Hong Kong to Nevada in the United States.”

The findings of the so-called Panama Papers investigation were unveiled at the beginning of April. Over 11 million documents held by the Panama-based law firm Mossack Fonseca had been leaked to the German newspaper Suddeutsche Zeitung. The paper shared the information with the ICIJ, which is made up of 107 media organisations in 78 countries.

The global news outlets examined 28,000 pages of documents, also revealing the full scale of the tax breaks won by 340 companies.

The details of the investigation have already claimed the scalp of Spain’s acting industry minister Jose Manuel Soria and Icelandic Prime Minister Sigmundur David Gunnlaugsson — each of whom stepped down because of activities exposed by the Panama Papers documents.

“The impact of Panama Papers has been epic,” the ICIJ said in the email.

“The investigation has led to high profile resignations, including the prime minister of Iceland; triggered official inquiries in multiple countries; and put pressure on world leaders and other politicians, such as Britain’s Prime Minister David Cameron, to explain their connections to offshore companies. It sparked a new sense of urgency among lawmakers and regulators to close loopholes and make information about the owners of shell companies public.” 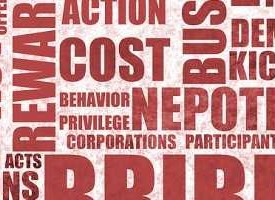 Yes, We are Corrupt