As humans, we can never be safe from facing failures and rejections in life. It is inevitable. But most of the time, people just stay quiet and give up after their failures. They consider it as an end, instead of a beginning. They forget that cement gets mixed in water but eventually ends up as concrete on which water can float but not enter inside again. There are numerous examples of those who turned concrete after facing various cruelties of life by people who they loved and trusted the most.

Ghiyas-ud-din Balban is considered one of the greatest kings of all time during the era of slavery in the Subcontinent. He was neither handsome nor attractive. He could not have been considered the cleaner of a palace, let alone its king. He was short, black and perhaps the ‘ugliest’ person of the time. When King Iltutmish to buy slaves, he bought all others except Balban. However, Balban somehow persuaded Iltutmish to buy him as well.

Balban realized his failure and eventually built up his power. He chose to fight and live against failure instead of giving up. Consequently, he re-assessed his priorities and achieved success day by day. Eventually, one day he became king of the Delhi Sultanate.

Imagine a king who was previously a slave. It was he who gave a tough time to the Mongols and upheld discipline in the society to such an extent that even after his death, people abstained from committing crimes.

The Harry Potter series is considered as the best selling fictional saga of all time; the business it did was astonishing. Here too, the reason behind its ultimate success was initial failure, depression and frequent rejections. Its author J.K. Rowling thought she was the most useless person in the world. Her family was not happy with her education, thinking and vision. As a result, she frequently went into phases of depression. She soon realized the worth of failure. During these isolationist phases, she would wanter into her imaginary world where she discovered and prepared the protagonist known as ‘Harry Potter. Today, her imagination has made her a billionaire.

Steve Jobs is known as one of the pioneers of technology. He revolutionized the lives of people through touch screen technology. Few people know he was once kicked out of the same company (Apple) he has established. He dropped out of school and used to consume only one complete meal in a week. But he didn’t bow to rejection. Instead, he realized his potential and started working hard . A time then came when Apple recalled him and entrusted the company to his able leadership once again.

Jack Ma is one of China’s wealthiest people. He invented Alibaba.com which caters to approximately 100 million customers every day. He has a net worth of more than $20 billion. Did you know that in the past, he was rejected employment by 30 companies? When KFC started in China, he was among the 24 prospective candidates who gave them interviews. All of them were selected except him. This was the time he realized he should make his own mark. Today, he is world renowned among the e-commerce community.

There are thousands of other examples of individuals who succeeded in life after persevering in the face of all odds. Standing up and fighting against one’s own depression is never easy and was not at all easy for them too. Their determination made them into heroes from zeros. A man can never stand up until he fell, and fell really bad and hard. We need to realize that the urge and power we possess can beat any failure, rejection and depression. The secret lies in identifying where you failed and moving on instead of clinging to it. Because it is only when you do accept that it cannot come back or change, that you get on the path of realizing the worth of your ‘failure’. And when you do, you too will be included among the list of some achievers discussed above.

Haider is a business graduate, an M-Phill student of management sciences, assitant at Capital Hospital, Islamabad and a blog writer/analyst.

What’s next for the displaced children? 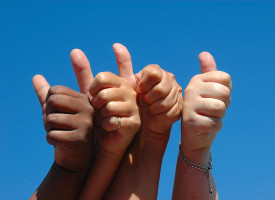