Roaring cheers!!!!! Spotlight!! The man, Amir Khan walks to the ring in the midst of a huge uproar. The song ‘Eye of the Tiger’ playing in the background. Stepping into the ring he eyes his opponent Zab Judah.

The bell rings, Ding, Ding, Ding!! A blow here and a blow there, one round after another and finally POW! The End! Judah crumples as a result of a powerful body shot by Amir Khan and is knocked out.

The crowd roars again….this Paki bloke has done it! Amir Khan’s trainer runs in with a life-size Pakistani Flag which Amir waves over his head and shouts PAKISTAN ZINDABAD!!!! 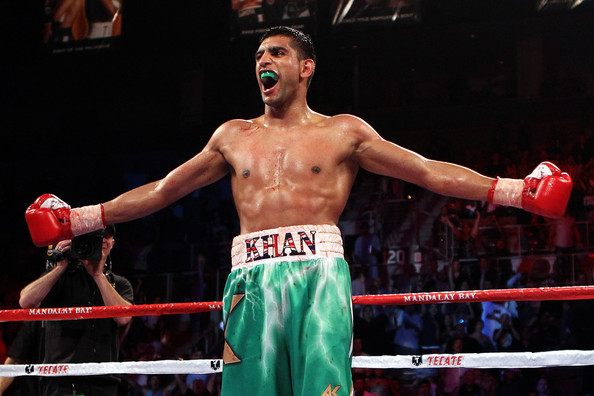 Ummmm…yeah right!! The only thing green in the ring this past Saturday were Amir’s knickers.

What I’ve been laughing about all of last week was the kind of coverage this boy has gotten in Pakistan. He has been portrayed as the Pakistani “Rocky” and another one of Pakistan’s contribution to the world of sports.

There have been posters and adverts and what not. Does anyone even know anything about this guy other than that his parents were Pakistani? I doubt that many do. Acha! You do? Ok, name the title he lost in the only match he has ever lost. And don’t ask Chacha Google please!

Honestly speaking neither did I, but this sudden barrage of the ‘PAKISTANI boxing champion’ made me curious. So here’s a fact list for you people:

I remember this Bollywood flick in which Katrina Kaif is seen telling a friend “I was born here (UK), I have lived here all my life, since the age of three I have been singing the British national anthem…I am not Indian but British”…this is the same case with this bloke. Born, raised, educated and trained in the UK.

Need I say more? This guy is as Pakistani as the brand Suzuki.

Bhai! Having the broadcasting rights to the match and the most popular news channel (read GEO) as a sister concern does not mean that you mislead people just for ratings!