“I don’t have any plans to make a return to test cricket…… I think I’m not the best choice for this format,” said Shahid Afridi recently.

Could he be more explicit?  However, this hasn’t stopped the fans from cajoling their favorite cricket hero to give test cricket another shot.  During the past five years, since July 2006, when he first announced retirement from test cricket, the question of his return has been debated time and again.

Setting aside the question of Afridi’s willingness to change his decision, we might want to ask ourselves, should he return to test cricket?

The current status of Pakistan’s team desperately calls for a captain who can mould them into a responsible, consistent and professional cricket team that can reclaim its past glory in test cricket.  However, with the very limited pool of qualified candidates for the job it is very difficult to choose the right person.  Some of the requisite qualities of a test captain include focus, discipline, humility, excellent people management skills and a willingness to take risks (but not being reckless).  Does Afridi fit the bill?  To some extent, yes; but he is also short of a few very important traits, including the temperament required for test cricket. 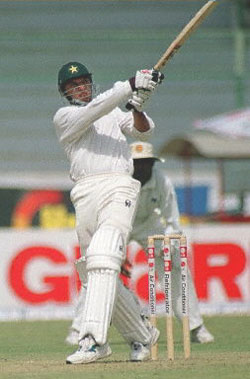 A majority of the Pakistani cricket fans are in love with Shahid Afridi and consider him to be one of the best things to happen to Pakistan cricket in long a while.  His success as a player and as a captain in one-day cricket as well as T20’s certainly makes him worthy of the fans’ love.  But we need to keep in mind his test record and strong reluctance for test cricket.  His brief return to the world of test cricket last year is still fresh in the minds of all cricket fans.

Even Afridi acknowledges his weakness as a test player. “With my temperament I can’t play Test cricket.  It is better a youngster comes in my place, probably a genuine batsman or even a genuine bowler.”

While explaining the lackluster performance as a player and as a captain against Australia last year, he said, “I wasn’t interested in playing Test cricket but the board asked me to go and take a look as they didn’t have a choice. So I took up the responsibility. They asked me to take a chance and maybe I would enjoy it. But I wasn’t really enjoying Test cricket but I tried. I wasn’t good enough. A captain should lead by example which I did not. And if I played the way I played in this match it is better to leave.”

His four year break from test cricket from 2006 to 2010 possibly contributed significantly to the dismal performance upon his brief come back.  However, he was man enough to take responsibility, “I am coming back to Test cricket after four years and in the interim I’d played a lot of ODI and Twenty20 cricket so I came in with the same [attacking] temperament. I was in two minds. You can say I was not strong mentally.”

A number of past cricketers have also contributed their two cents in this debate.  Imran Khan strongly feels that Afridi should embrace the challenge of test cricket once again and he should be the captain for all three formats of cricket.  “Afridi must also be captain in all three formats of the sport. My belief is that unless you captain in test cricket you can’t really be at the top of your game,” said Imran.

Then there are others who don’t share the same feelings, “When a player who is not interested in test cricket and also claimed that he won’t change his playing style according to the particular format then how could the board rely on such player to lead the side,” expressed Zaheer Abbas.

So in the end, maybe its best we allow Afridi to enjoy doing what he does best in ODI’s and T20’s and look elsewhere for a Test captain.