Identical to country’s politics, sometimes Pakistan Cricket has to face negative criticism despite good performances. The recent catastrophes of Pakistan Cricket have buried fans to pessimism that even when someone does good they think there is something fishy. He is selfish; plays for himself, puts team in trouble and walks out clean, and some cynics even consider him a conspirator to snatch captaincy by scoring runs in bulk. Amidst all this negativity, there is one thing which doesn’t stop him and that is the man himself, Misbah-ul-Haq! 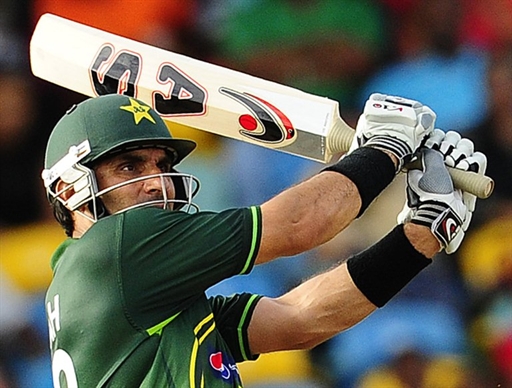 After spells of calmness and solemnity, there he goes areal with his trademark shot. AFP

Misbah came of age, at age of 33, when most players start thinking about retirement plans. This at least vindicates his passion for cricket, more precisely passion for success in Cricket. Since his second coming – in 2007 – he has been Pakistan’s lynchpin in adversity. He has performed like an anchor of storm-hit yacht, proved his worth and selection in team, now at 37 he does what a rookie wants to do to make an impact. There is some energetic lad – who is always eager to perform – disguised as Misbah.

With 412 runs in 2011, Misbah is leading run-getter of this year (2011) in Test Cricket. But as the amount of Test Cricket played by other countries is too slender, so far, so lets include performance of all formats in 2011.

Most of Pakistan batsmen don’t enjoy outings away from home; they have always struggled to make a mark. But Misbah surpassed many Pakistan greats, his batting never dwindled even playing in alien conditions. He has the best average (50.37) among all Pakistan batsmen. Though 15 matches is too low a career to give credit but when compared to Javed Miandad and Younis Khan, it justifies Misbah’s heap. After 15 Tests away from home, Miandad’s average was 40.34 while Younis’ was 42.10, however Inzamam-ul-Haq is one player who maintained his average right from start.

In recent years, Misbah has also been Pakistan’s most reliable batsman in Test Cricket, a format where Pakistan team always struggled. He came back to Test Cricket in October 2007 and that is when Inzamam-ul-Haq got retired. Since his comeback and Inzy’s retirement, he has second most runs (1520) in Test Cricket among Pakistan batsmen.

Since his comeback in 2007, among Pakistan batsmen who have at least scored 500 runs in Test Cricket, he also enjoys second-best average (54.28) followed by Younis Khan’s 60.27.

Be it One Day Cricket or Test Cricket, batting on venues away from home is not what Pakistan has savored. Even in limited-overs Cricket, Pakistan batsmen never performed like they did at home. But Misbah has surmounted here too. With an average of 47.17, he is easily the most dominant batsman at venues both at home and away. Even if we compare Miandad and Yousuf’s averages after 49 ODIs, the former had 29.61 while the latter had 34.20, they are too low to Misbah’s 47.17

He is Pakistan’s second most run-getter with 1884 runs since his comeback in September 2007. Moreover, among Pakistan batsmen who have scored at least 500 runs, Misbah has second best average (44.85) followed by Yousuf (45.52) though the latter’s two centuries against Zimbabwe and Bangladesh helped him gaining 45.52

Even at 36, expectations can’t be stopped. He is still as energetic and keen to perform as a rookie is. On May 28, the day when he will formally take over Pakistan’s ODI captaincy against Ireland, he will turn exactly 37 but with current form and fitness one can hope that he will play for another 2-3 years. And if he stays captain for couple of years, he surely can groom – under his shadow – some young blood as a future leader.

As a leader, he keeps an immaculate record as he has never lost a Rubber. In 3 Test series he captained, Pakistan drew against South Africa (0-0), won against New Zealand (1-0) and drew against West Indies (1-1). Under his captaincy, Pakistan also won their first Test series since November 2006 [in nearly 4 years].

In ICC Rankings for Test batsmen, Misbah is on 22nd spot. Only Younis Khan (17) is ahead of him among Pakistan batsmen.