On notorious day of 5th February 2011, Pakistan Cricket was slugged a haymaker as their three Cricketers – Asif, Aamir and Butt – were banned for minimum 5 years by International Cricket Council (ICC) after they were proven spot-fixers by ICC’s tribunal. A year and day later, Pakistan respond by clean sweeping Test Cricket’s Number one team (England) 3-0 in Dubai. Even on the same day, when players were handed bans, Pakistan riposted by completing an ODI series win, after gap of over 2 years, in New Zealand, giving signal to world that they aren’t going to end. However, there is no fellow feeling for those who contaminated the game as it has gone better without them.

If Japan, today, is considered as epitome of prosperity, a reason behind is they flourished after getting whacked by Fat Man and Little Boy. Pakistan Cricket, too, have flourished same way. The spot-fixing episode and that terrorist attack in Lahore weren’t less than Fat Man and Little Boy. But they recovered with best of their styles, using their unpredictability as a triumph card. They have mounted by leaving all the evils behind. What defines Pakistan Cricket, at the moment, is how well they have risen after falling in the deeps of the lows.

There were bans and fines, disequilibrium, disciplinary issues, rifts and dirty politics among teammates, inconsistency:  due to all these reasons, victories were shy to reach them, and they were going through menacing spot-fixing filth which could have at least suspended, if not ended, their Cricket in all possible ways.  They needed someone to kill these ills and provide stability. As it turned out, appointment of new Test captain, who wasn’t even part of preceded tour, although a makeshift and accidental move, had a hidden promise of taking Pakistan Cricket out of these crises. In Misbah-ul-Haq, they found, like an elixir, cure to all ills. As they say salvation lies within.

Smothering the hindrances to thrive forward and leading as an iceman, Misbah transplanted his cool, calm, defensive and consistent approach in field to revive Pakistan Cricket, making it rise from the debris. It’s his astute captaincy in which, now, they trust.  His consistency in team-selection and trust on players’ abilities have provided many players security and squelched fear of getting dropped.

It is no coincidence that under Misbah’s leadership, for the first time, in their history, a Pakistan opening pair – Taufeeq Umar and Mohammad Hafeez- has played more than ten consecutive Tests. Their one down batsman Azhar Ali hasn’t missed a Test since making his debut, has played 21 straight Tests and didn’t lose his number 3 batting position under Misbah’s leadership. Younis Khan, too, has played all matches under him batting at number 4 and Misbah, himself, is rigorous at number 5. Such is the consistency which was hardly seen in Pakistan Cricket of late. To surprise you enough, Mohammad Hafeez hasn’t missed any of the last 68 international matches Pakistan has played. 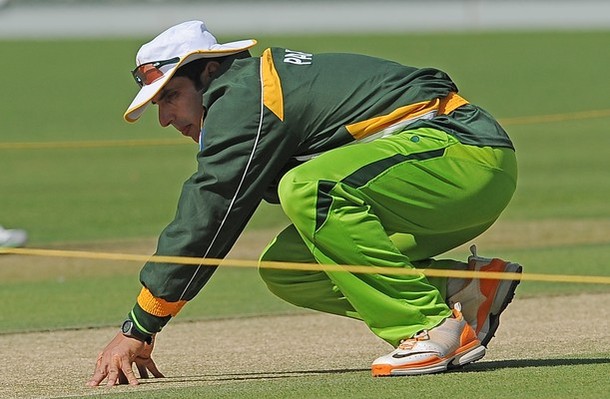 One of Misbah’s remarkable traits is his ability, like an astute farmer knowing all the norms of soil and sod, to read pitch and select players accordingly. (Photo Credit: AFP)

One of Misbah’s remarkable traits is his ability, like an astute farmer knowing all the norms of soil and sod, to read pitch and select players accordingly. He had won toss on seven previous occasions and remained undefeated all the times but in 2nd Test at Abu Dubai, where they remarkably bowled out England for 72, it was only second instant, with foresight of pitch getting deteriorated and help for spinners on last days, that he opted to bat first. Also his remarkable selection of combination of 3-pace and 1-spin attack against Sri Lanka at Abu Dhabi last year speaks the worth itself.

This is with Misbah’s serene and cautious, albeit defensive, formulation that Pakistan batting, which was prone to collapses, has learnt the art of anchoring and building the innings in spite of losing quick wickets. At times, like a pure guardian, he himself is up there to put resistance against bowlers.  His batting display, 84 off 173 balls, in 1st innings of Abu Dhabi Test against England is vindication of his sedulity. Also the T20I innings in Abu Dhabi against Sri Lanka was sheer display of manoeuvring without involving risks- that’s his foremost attribute.

It was, perhaps, possible only with his stellar role that Pakistan haven’t lost any Test, ODI or T20I rubber under him. In 15 Tests he captained Pakistan, they lost only once and won on nine occasions, and in 14 ODIs, again lost only once and won 13 times. When Pakistan won against England in 3rd Test, it was their 13th consecutive international win. Since, May 2011, taking over as full-time captain of Pakistan, Misbah has led in 27 international matches and only once he was defeated.

Notwithstanding his brilliance, spitfire Cricket fans of Pakistan still get idiosyncratic in criticizing Misbah. They keep exhuming ghosts of Mohali to take him under radar of finding faults. Like notorious juveniles needling their radial pulses after getting failed in puppy loves, they keep needling Misbah – whose role in Pakistan Cricket is quite of a radial pulse – for that defeat in Mohali. All three Tests against England were ended inside 4 days still the cynics, with outcries of Tuk Tuk, want Misbah to be aggressive.

Despite all the triumphs of Pakistan there exist pros and cons of Misbah’s leadership. However, the cons will keep scratching their lives in taunts of Tuk Tuk while the pros will find solace in chants of Mard-e-Haq, Quaid-e-Haq – Misbah-ul-Haq, Misbah-ul-Haq.