It might sound a clumsy cliché that Pakistan is the most unpredictable team but it is, indeed, the flair of their unpredictability which has given Pakistan victories, snatched from jaws of defeats, turning into epic glories. A policeman, Fazal Mahmood, started the tradition at Oval 1954 when his 6-wicket haul folded England 143 all out in pursuit of mediocre 168. The tradition then was handed to the likes of flamboyant Imran Khan, the menacing pair of Wasim & Waqar and ruthless Shoaib Akhtar.

Their unpredictability, of late, had rather gone diametric. They let the games slip and watched it happening in Test of Galle 2009 and Sydney 2010, St Lucia 2010 [World T20 Semi Final] and, to some extent, Test of Dunedin 2009 and Guyana 2011. All these times, they were found wanting. To the worst of their memories, they were bundled out on 92 in chase of 146 – which to date is the shortest target they never achieved – against South Africa in Faisalabad Test 1997 despite presence of Wasim, Waqar, Inzamam and Saqlain.

This time it was their turn to inflict the atrocity and see it happening. The antiquity of their positive unpredictability is back. After scratching its life in opprobrium, Pakistan Cricket has come back to where it belongs: the resplendency of the unpredictability. I mean, seriously, how often do you see World Number One team giving 72-run-win, out of 145, to Pakistan? 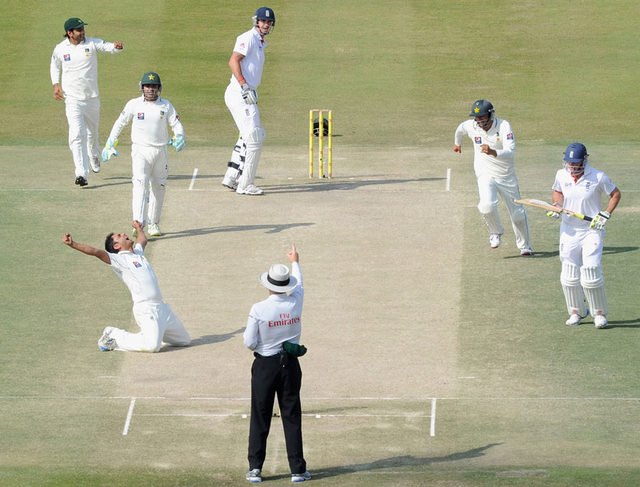 If there ever was a cavity left in lauded and merciless history of Pakistan bowling, it was for an orthodox left-arm-slow-bowler which Abdur Rehman, now, has repleted. (Photo by Gareth Copley/Getty Images)

Pakistan have relished astounding victories by hands of right-arm and left-arm fast bowlers, reverse-swingers , leg-spinners, off-spinners, doosras, wrong-uns. If there ever was a cavity left in lauded and merciless history of Pakistan bowling, it was for an orthodox left-arm-slow-bowler which now Abdur Rehman – the underrated weapon which embarked the annihilation against England at rank-turner in Abu Dhabi – has repleted.

Pakistan now has an unassailable lead of 2-0 against the best Test team of rankings. It’s the first time, since ICC Rankings officially came into existence, that they have won Test series against a top ranked side. If they manage to whitewash England 3-0, it will be their first clean sweep, among series including three or more Tests, against a hardheaded opposition since drubbing West Indies (3-0) in 1997 and, arguably, it will be their most convincing Test performance of history.  Only four times before – versus Australia 1982, New Zealand 1990, West Indies 1997 and Bangladesh 2003 – Pakistan have clean swept a team 3-0. However, the series in 1988, which was drawn 1-1, against and at home of the then most hostile team West Indies, can be put to argue with the current series against England.

In recent memories of Test Cricket, England beating India 4-0 last year aside, only England’s Ashes win of 2-1 against Australia, who were then Number one in Rankings, in summber 2005 comes to mind as brilliant as Pakistan’s ongoing performance against England, the incumbent of top spot of Rankings. Pakistan’s resurgence to 72-run-win against England at Abu Dhabi also came as remorseless as Harbhajan [Singh] and Karthik [Murali] spinning Australia to 93 all out, falling 13 short of the target (107), at Mumbai 2004. But in the latter case the pitch had beast of spin and the match was dead rubber as Australia, number one Test  side of that time, had already won the series.

The UAE episode of Pakistan Cricket becomes more glaring with fact that they [Pakistan players] are homeless Cricketers. Their captain [in Test Cricket] has never led them in Pakistan and their history’s quickest bowler to take 100 Test wickets, Saeed Ajmal, hasn’t taken any of those 100 scalps on his home soil. They have found their old flare back in an unfamiliar place which , now, literally sound as their “home”. Though it is very naïve to say, but after what this land of deserts has given back to Pakistan, they won’t mind playing in UAE even when Cricket comes back to Pakistan.

It won’t be an exaggeration to consider Pakistan as the most improved Cricket team of this era. They had a horrible terrorist attack which ended Cricket in their country. They didn’t play Test Cricket for more than a year from December 2007 to onward. Their players were sent to jails for corrupting the game. Any win in bilateral Test or ODI series didn’t come to them in 2009 and 2010 but, now, since start of 2011, they haven’t lost any Test or ODI rubber and won eight, lost only one out of their last 14 Tests which they have played after Spot Fixing scandal. Indeed, they have cleaned themselves from all the impurities.

The élan of snatching victories, which was mundane during reigns of Imran Khan, Wasim Akram and, somehow, Inzamam-ul-Haq, is on its way back to Pakistan and this time it is being harvested by Misbah-ul-Haq whose sedulous, shrewd and sang-froid approach has opened new horizons for Pakistan Cricket. They are no more spot-fixers now. All the notoriety of late is now water under the bridge.  They [on field] have gone as merciless as they were in late 1980s and in 1990s. The venom is back. The preys have been targeted. The deaths have been whispered.

Glory of Pakistan Cricket has come full circle. It has reached its summits again. After all, for how long could it be repressed from the champions?  Pakistan are the champions: this is their fate and fate is inevitable.