Pakistan don’t keep that appealing Cricket rivalry against England as they do against India neither their matches, against England, are as awaited as of Australia but England is the Test team whom they have faced most often in Test Cricket, 71 times – the most they have played against any team,  in their history.  England, however, hold sway against them in nearly every aspect but away matches, which must give Pakistan little bit respite in coming series though the very first time they will lock horns at a Neutral Venue. In fact, England have never played Test Cricket at neutral territory.

England have also enjoyed Test Cricket against Pakistan in recent past, since 2000, as the former have won 8 Tests while the latter have only 4 and 4 were drawn too. Five Test series have been played between them since 2000: Three times, year 2000, 2006, 2010, England was triumphed, once Pakistan, in 2005, and once it was drawn in 2001. However, the two series, played in 1990s, both were Pakistan’s away series and they won on both occasions, in 1992 and 1996, thanks to deadly and menacing bowling of the two Ws, Wasim and Waqar.

It will be second consecutive Test series that Pakistan batsmen will be up against England bowlers with meek experience. The sorry state of batting experience in Pakistan’s current 16-member Test squad is evident from the fact that Umar Gul is one of the five leading-run getters against England. Last time, in 2010 in England, when they faced the hosts, they didn’t have Younis Khan, who looks most formidable against England in current squad.  Misbah-ul-Haq, the skipper, who has provided Pakistan batting with calmness, and Asad Shafiq are yet to play against England. The likely openers, Taufeeq Umar and Mohammad Hafeez, have only played a Test each against them. Hafeez, though, scored an appealing 95 in that Test at Oval 2006 which later turned into a fiasco. 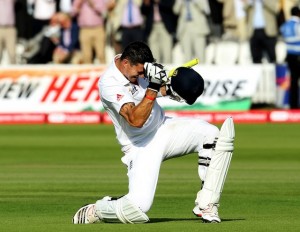 In contrast to his astute career batting-average, KP's diminished batting average against Pakistan is a worry sign for him. (Photo Credit: Adrian Dennis/AFP/Getty Images)

Unlike Pakistan batsmen, England’s [batsmen] are enriched with experience and have reasonable runs to make their resume stronger to outsmart Pakistan batting line-up. Four of their batsmen have scored 500+ runs against Pakistan and the fifth one has 404 runs at average of 67.33 in just 4 Tests. Despite being ripe with runs, there will be a worry state for Kevin Pietersen and Alistair Cook, whose batting averages are, relatively, unimpressive against Pakistan when compared to their career’s batting averages. Pietersen keeps average of 50, in his Test career, which drops to 36 against Pakistan. Cook also has career-average near to 50. 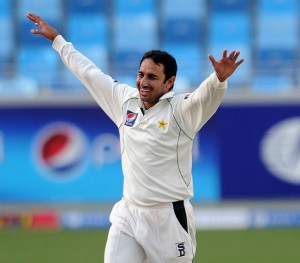 Saeed Ajmal, who was leading wicket-taker of year 2011 in Test Cricket, is tipped as Pakistan's spearhead in bowling department against England. (Photo Credit: Lakurwan Wanniarachchi/AFP/Getty Images)

Like their batting experience, the bowling experience is no different for Pakistan. The combined squad just has 41 wickets, all of them were taken in away Tests, between them against England. None other than their 3 bowlers have a wicket against England. Junaid Khan, Abdur Rehman, Mohammad Talha and Aizaz Cheema are yet to taste English batsmen.  The bowling unit could have been enchanted had the notorious duo – Asif and Aamir, who share 36 wickets against England – not axed their feet

Contrary to Pakistan’s experience of 41 Wickets, England’s current bowling squad has 91 wickets against Pakistan with Anderson and Swann keeping astute bowling averages. Interestingly, all of their top five bowlers, except for Monty Panesar, yielded all these wickets when Pakistan toured England for 4-Test series in England in 2010 whereas Panesar’s all wickets came, in 2006, again in England’s home series. Their part-timers, Ian Bell and Kevin Pietersen, have also a wicket each against Pakistan.

Two consecutive Ashes wins, 4-0 drubbing to India, then the Number one team of Test Cricket and being leader of current Number one team (England) are enough to prove that Andrew Strauss is most successful Test captain among his contemporaries.  But to add more spice, Strauss has the best winning record against Pakistan – 6 Test wins out of 8 Tests he captained, and also keeps immaculate record of two consecutive series wins, in 2006 and 2010, against  the Green Caps. He has only captained against Australia, 10 times, more than Pakistan.

On the other hand, Pakistan skipper Misbah-ul-Haq, let alone a captaincy experience, is yet to play a Test against England even an ODI. All he has played against them are two Twenty20Is, both of which Pakistan lost. But Misbah, since taking over as Pakistan captain in November 2010, has been most impressive with his bat as well as his leadership. In 12 Tests he captained Pakistan, only once he lost and  is yet to lose a Test rubber and has won 4 Test series for Pakistan -though 2 of them were against Zimbabwe and Bangladesh.

He has scored most runs among his contemporaries and also has the best average and the most fifties. 11 scores of fifty-plus in 12 Tests prove his consistency. Known for his sluggish and defensive approach, he also has hit second most Number of fours among captains but the diminished Strike Rate of 43.10 vindicates his problem in rotating strike not in hitting boundaries.

All the stats are till 12th January 2012 and don’t include the 3rd Test between India and Australia being played at Perth.