The South African left-arm fast bowler Wayne Parnell has accepted Islam as his new religion. He, if selected in future, will now be third Muslim in current South African team along with Hashim Amla and Pakistan born Imran Tahir.

Another  South African news site also says  that he has not finalized his Islamic name yet but it is likely to be Waleed. As of now he is Wayne Dillon Parnell.

Some forwarded text messages are of the view that Proteas ODI vice-captain Hashim Amla’s influenced Parnell’s conversion from Christianity to Islam. However, Parnell’s agent Ismail Kajee has denied this rumor. 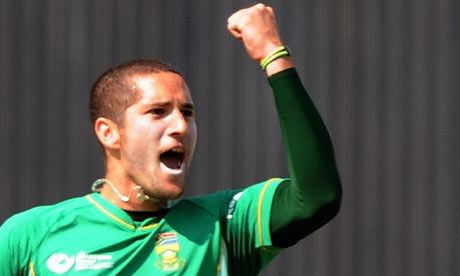 Wayne Parnell, who is about to turn 22, was captain of South Africa’s team in U/19 WC 2008. He made his Test debut in 2010 against England after making his ODI debut in 2009 against Australia.

Parnell is a left-arm bowler who relies on his pace and is highly regarded as limited-over cricket specialist. In ODIs, so far, he has taken 31 wickets in 19 games. He is also known for his hostile, yorker-infested, spell against Pakistan in ICC World T20 Semi Final 2009 in Nottingham.

He has also represented Delhi daredevils and Pune Warriors in IPL 2010 and 2011 respectively. Currently, he is a team-mate of Rana Naveed-ul-Hassan and Umar Gul in Sussex county’s campaign in Friends life t20 in England.