I’m sure you guys are all aware that hockey is Pakistan’s national game. With all the importance and time given to cricket one might be fooled into thinking otherwise, but it is hockey.

And when we talk about hockey in Pakistan we can’t help but mention Sohail Abbas.

What makes Sohail so Great?

Sohail Abbas is a living – and in fact playing – legend of Pakistan hockey. Although he plays as a defender, he is one of the greatest penalty corner specialists and the highest goal scorer in international hockey today. 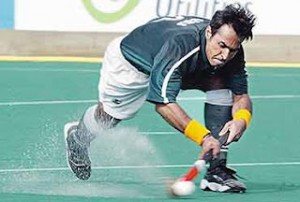 Born on the 9th of June, 1977 in Karachi, Sohail Abbas comes from a family of sportsmen. Although his father was a first class cricketer, it was his uncle Safdar Abbas, the hockey player (a left-winger who scored at the age of 16 against Argentina during the 1973 World Cup), who inspired him.

Although he studied at Karachi’s Habib Public School, which has produced several great hockey players, as a young hockey player he had difficulty making an impact on the professional hockey leagues. However, eventually his performance in the 18th Junior National Hockey Under-18 championship in 1995 secured a place for him in Pakistan’s Junior squad.

Sohail Abbas’s next major outing in the field was in the 3rd Junior Asia Cup at Singapore in 1996, after earlier being dropped from the tour of Netherlands, Germany and Poland. Following the Junior Asia Cup he played for the Pakistan Junior side again in 1997. This side went on to beat Germany Junior consecutively in four test matches.

But as fate would have it, four months later Sohail Abbas was dropped again from the Pakistan Junior squad due to which he missed out on the 1997 World Cup staged in Milton Keynes.

However, this stuttering start didn’t stop him and in 1998 Sohail Abbas made his debut in the national team after which there has been no looking back.

His tally of goals in 1998 was 20 but the best was yet to come. In 1999 he set a world record for the most number of goals in a calendar year with 60 goals in total, surpassing Litjens record of 58 goals. The same year Sohail Abbas was the highest goal scorer in:

Another remarkable feat this year was that he scored 7 goals against Sri Lanka making him one of only 9 players that have made double hat-tricks in international matches for Pakistan.

Sohail has no dearth of records. Here is a list of some of his more prolific records:

Today, Tomorrow and Beyond
Sohail retired in December of 2004 following the Champions Trophy in Lahore at the age of 27, but fortunately in 2006 he came out of retirement.

He was part of the team that received the gold medal at the 2010 Asian Games held in China and just recently it has been announced that he will lead the Pakistan team in the Sultan Azlan Shah Cup Hockey Tournament 2012 and tour of Europe.

We’re all praying for Sohail Abbas and team Pakistan! God be with you!