A night of March 24 and spring season at its best. Every Pakistan-cricket-maniac is keeping fingers crossed, waiting for the elusive sun to rise when his country’s cornered tigers will face-off England in the Final of Cricket World Cup 1992 at the world’s largest Cricket stadium, Melbourne Cricket Ground (MCG). The masses rue for not being at MCG yet possess the gung-ho to cheer their cornered warriors from their abodes. It is also a month of Ramazan and 18th of this holy month. The sun of March 25 rises with hardly a faster, in Pakistan, who completed his sahri without praying for his country’s glory. This is all happening here, what in Melbourne?

Pakistan troops are marshalling at MCG, a stadium circumferenced by gigantic enclosures to give it looks of Colosseum. Imran Khan, like a combat leader, making strategies with his lads, who are all ears to their captain.” We were sinking in the bottom of the table yet we are in final, the rains are with us, we beat twice the unbeatable team (i.e New Zealand), who could have imagined us chasing 260s in penultimate Final, world’s finest fast bowler in Wasim [Akram] we have, Inzamam’s [ul-Haq] cameos can turn the tables, Javed’s [Miandad] anchoring innings can frustrate oppositions, Mushtaq’s [Ahmad] googlies disarray batsmen, is there any reason which keeps us away from becoming World Champions?”, asks Imran. “No, sir!” is the answer from the troops. Imran, wearing the Tiger T-shirt, heads towards pitch for the toss, the most important of his life. He knows none of the teams have won World Cup while chasing target so he would win the flip-of-coin-contest to ask England to bowl first.

Pakistan openers Aamir Sohail and Ramiz Raja enter the ground before a behemoth crowd – 87,000 was counted – at MCG. Start would not be good for Pakistan. Ab initio, Pringle [Derek] takes out Pakistan’s openers with his out-swingers. So it is time for Imran to join Miandad and drop the anchor in the storm (Pakistan 24-2). In spite of World Cup Final’s pressure, Imran is as cool as cucumber, takes his time to settle, he has all the time in world. Javed on the other hand is no-different, making progress by nudging singles and doubles. They both put fight with stand of 139, but now Javed has to go with his far-famed reverse-sweep. Inzamam-ul-Haq and, later, Wasim Akram join the party and put their little cameos of 42 and 33 runs respectively. Pakistan set 250 for England to win Final and World Cup.

As Pakistan come to defend the target, 40-year-old Imran Khan is nursing his shoulder so he puts his all trust in the duo Wasim & Aaqib and gives them new balls. 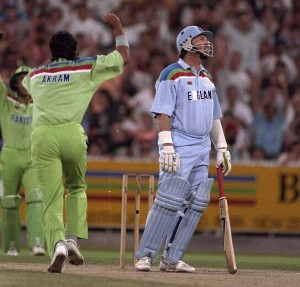 Wasim Akram will bowl to Ian Botham at first. Akram grasps the ball, licks his fingers, wets the ball as if he is injecting some venom, rubs it on trousers to get the shine, to get the swing and there would they be. He steams in – a short, mesmerizing and an ever cool run-up – to bowl at Botham. Swirls his dexterous arm as he goes past umpire. Spears the ball on good-length. It bounces off the turf with colossal surge and what a jaffa it is: angling away from Botham who nicks it past Moin [Khan] who pouches it with delight. Akram turns back to the Umpire, raises his arm, more so finger, asking for caught behind. It is given out. Akram celebrates, lofts both arms up in air then punches through air with left-one. Wasim was venomous; Beefy was baffled. [20 years to that incident, Botham has still not accepted he nicked that ball].

England soon get to two down, Mushtaq [Ahmad] spins his presence in. He bowls googly, nothing short of a conundrum, to Graeme Hick, he doesn’t know where to play and misses it. Mushtaq appeals for LBW and up-goes the finger, Hick is gone. Soon Gooch would go for the slog against Mushi. Its high in the air. Aaqib, steams off from deep square-leg, stoops down, clutches ball, bumps off; all this to take a magnificent catch, one of the best of this tournament. Mushtaq runs towards Aaqib with his arms and legs on treadmill-celebration. Gooch leaves for pavilion. England’s top order has been rattled. Pakistan crowd goes ecstatic; their flags are flying all over the MCG. England is 69-4 and Pakistan in control.

Neil Fairbrother and Allan Lamb put some fight and make a partnership of 72. Now a discussion, little bit tension too, arises in Pakistan’s think-tank. Imran scratches his chin for a while and then asks Pakistan bowling torch-bearer Wasim Akram to have a go. Akram, with 17-over old ball, gets the opportunity to etch his heroics in the folklores, which would be told in years to come.

Here comes Akram – around the wicket – to Allan Lamb, crosses the Umpire, bowls to Lamb, a part-fuller, part-good-length, it darts in, it swings away, puts Lamb in dismay. Akram’s delivery has scythe through and the timbers are nudged. Akram has chopped the Lamb to relish Pakistan. He himself is astonished. Arms are aloft as he runs forward as he hugs Moin. This is the most incredible delivery we have seen from him. Lamb, the danger man goes back.

Now Chris Lewis is the next batsman and Akram now is galloping to bowl at him. Akram runs in, bowls bit-wider to swing-in, lures Lewis on front-foot, but he has played on, onto his tumps. This is spacially special bowling by Akram. Lewis is bowled, he perishes first ball. Two in two for Akram, who is now on hat-trick.Wasim, you beauty! Are you going to bowl all Jaffas today? 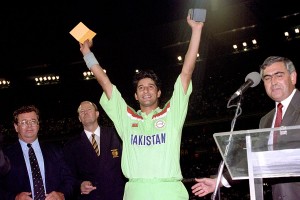 Wasim Akram receives Man of the Match for nailing Botham, Lamb and Lewis with his superb deliveries. (Photo: PA Photos)

Pakistan have smelled the victory. The moments are electrifying at MCG. Eighty-seven Thousand crowd is up on its feet. Pakistan is on top of the world.

Pakistan now whittle through England’s tail to make sure it doesn’t wage to frustrate. England need 22 runs off 5 balls; Pakistan a wicket. Imran bowls to Richard Illingworth who balloons the ball high in the air. Ramiz [Raja] comes beneath it, Pakistan are about to become World Champion. Voila! the catch is taken, glory is taken, world cup is taken. Pakistan have become the World Champion of Cricket for the first time in history. Players go in Sajda as they are blessed with the title of World Champions. Crowd hail the heroics when players start lap of honour with that glimmery, shiny, crystal Trophy atop.

This article was first published on 25th March, 2010 with slightly different words.

Written and compiled by Mazher Arshad [ Facebook: www.facebook.com/mazher157 and Twitter:https://twitter.com/#!/cricket_U ]