The NBP Ranking Snooker Championship that was recently held in Karachi began with a lot of excitement and expectations because a number of big names were competing.  However, it progressed with several upsets as the top seed Shahid Aftab, Asjad Iqbal, Khurram Agha and veteran players Naveen Perwani and Muhammad Yusuf could not live up to the challenge presented by their opponents at different stages of the tournament.  Pakistan’s number two player, Imran Shehzad, and number four, Sohail Shehzad, locked horns for the final battle held on July 27th, at the Karachi Club.  Imran Shehzad clinched the trophy after a relatively easy victory in the final.

The 17 frame final game began with high expectations from the spectators as both finalists, Imran Shehzad and Sohail Shehzad, showed great promise in the earlier stages of the tournament.  However, the showdown did not meet the expectations of the fans and ended up one-sided.  Imran Shehzad easily claimed victory in straight frames 92-24, 55-1, 74-10, 68-10, 62-04, 59-36, 54-37 and 65-18.  Imran’s victory repeated the history made 11 years ago by the former champion Saleh Muhammad.  He defeated his opponent in straight frames in a ranking snooker tournament in 2000.

Imran played with a good strategy and did not attempt to get big breaks early in the game.  Instead, he waited for the opportunities to present themselves and then capitalized on them.  This strategy paid dividends and set him off to an excellent start.  He skillfully played to his opponent’s weaknesses and turned his errors into opportunities.  The second frame wasn’t much different as Sohail continued to struggle to get back in the game but several missed chances robbed him of any breaks.  The battle continued till the sixth frame when Sohail was able to gain the lead, but it didn’t last long and hopes of his comeback were demolished by a 53-point break from Imran.  From this point on, Sohail seemed to have accepted his fate and did not offer much resistance.  Imran’s superb cue control and potting paved the way for the victory. 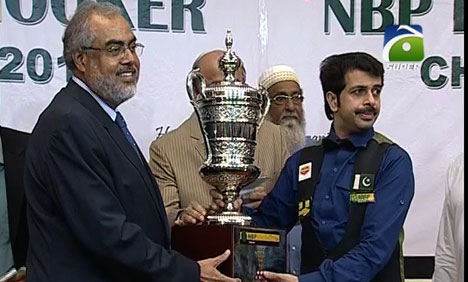 Imran himself was a little surprised by this victory.  “I wasn’t expecting such a win because Sohail is a tough opponent.  I just wanted to be careful and opted not to go for big breaks. After a couple of frames, I realized that Sohail was having an off day so I became more aggressive.”

During a decade long career of playing on the domestic circuit, Sohail came close to winning titles but always remained one step shy.  The final of the Del Monte Snooker Cup in October 2010 was the first time he fought for a title in the final.  Although he lost that match, it earned him a spot in Asian games at Guangzhou and in the Damascus world championship.

Sohail entered into the NBP championship with hopes of winning his first ranking tournament but a lackluster performance didn’t let him win the title.  “It wasn’t my day,” he said. “It’s my worst performance ever since I started my career. The table was also not up to the standard. It had height and base problems.”

A great performance is always the defining factor in any win but sometimes there may be other factors that can hold some contenders back.  This was the contention of some of the top players in this tournament who complained that sub-standard tables impeded their way to victory.  These players included Shahid Aftab, Sohail Shehzad and several others.  However, the Pakistan Billiard and Snooker Association (PBSA) does not buy this explanation and considered it just an excuse to hide poor performance.

“It’s just a lame excuse for their failure,” said PBSA Joint Secretary Arif Tahirbhoy. “The table is for both players, not just one. If there were issues, how can one cueist perform better?”