Pool halls scattered around the big cities in Pakistan are considered by many a nuisance where the youth waste their precious time.  This assertion is true to some extent, but there is another side to these joints.  The pool/snooker parlors are also acting as nurseries for budding players of a sport that is on the rise in Pakistan and has brought home two amateur world championships and several other top 10 titles.

Growth of Professional Snooker in Pakistan

From its humble beginnings in 1958, followed by a revival in 1979, the Billiards Association of Pakistan (now the Pakistan Billiards and Snooker Association), has slowly but successfully promoted the game of snooker in Pakistan.  It has helped produce champions like Mohammed Yousuf, who won the 1994 IBSF World Snooker Champion and also clinched the 2006 IBSF World Masters Champion.

The growth of all sports depends upon regular participation in competitions; the PBSA is trying its very best to participate in as many events as possible.  Despite facing many issues hampering the true potential of the game, Pakistan is continuously striving to move forward by participating in international tournaments as well as hosting tournaments at home.  After the defeat in the recently held five-day bilateral series in Iran, Pakistani players are not dwelling on the loss but are getting ready for the next challenge.  Mohammad Sajjad, the top Pakistani performer in the tournament, commented while talking to a local news paper, “We got the much-needed training by playing in Iran… The series will definitely benefit us in the Asian Snooker Championship that follows soon.” 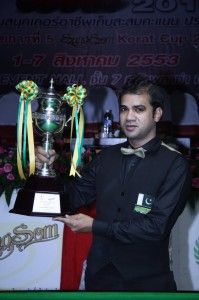 A fairly hectic snooker schedule has been planned for 2011, with seven international events and six or more domestic events.  The Pakistani squad is waiting to get visas and a special grant from the Pakistan Sports Board to go to Indore, India to participate in the 28th Asian Snooker Championship 2011 starting in a few days.  The Pakistani team for this competition comprises of top ranking players including Mohammad Sajjad, Mohammad Shahid and Imran Shahzad.

The future of snooker seems promising in Pakistan due to the relentless efforts of the PBSA and continuous infusion of new blood in the sport.  One of the major hurdles for a bright future for snooker in Pakistan is the lack of funding.  A sad example of this shortcoming is the pull out of Pakistani squad from the Asian U-21 held in Iran recently.  PBSA is working hard to overcome the hurdles; during a recent meeting with the members of the National Assembly’s Standing Committee on Sports, PBSA chairman asserted that snooker has achieved several top standings in International competitions and our players have been making us proud for the past 20 years.  The chairman requested that on the basis of the performance, a special grant should be allocated to secure the future of the game in Pakistan.  A country that is spending millions of rupees on cricket shouldn’t have any problem arranging for a mere eight million (the annual budget of PBSA) for PBSA.  At the end of the meeting, the government agreed to provide funding of Rs. four million, matching the PBSA’s own contribution of four million.  Other efforts being made by the PBSA to brighten the future of snooker in Pakistan include lobbying for a foreign coach, establishing snooker academies in Karachi and Lahore to groom the young players and raising the monthly honorarium for the top eight players of Pakistan.

In addition to the efforts of the snooker officials, players and enthusiasts are also playing their part to promote the game.  Social media sites like facebook are being used to communicate everything from tournament schedules and scores to playing tips and coaching videos.