In a country where news channels have a section for sports and then one on cricket and where people sometimes unwittingly say that cricket is the national game, it’s easy to understand how squash in the country went from producing a great like Jahangir Khan to being an obsolete sport.

I swear! I don’t understand why squash hasn’t been given its due attention like cricket, and to some extent hockey. Have we forgotten Jahangir Khan and Jhansher Khan? 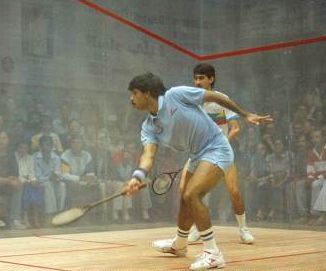 You don’t think so?! You think Mr. Tiger ‘unfaithful’ Woods is more successful? Well if money, number of endorsements, or TV commercials is your measure, then Tiger could lead the pack.

BUT, if you measure success by the number of titles won, the longest unbeaten streak, or achievements in the ACTUAL field of sports, then Jahangir Khan is your man!

At the age of 17 Jahangir became the youngest ever Squash World Open champion, humbling the great Geoff Hunt.

The Khan holds the record for the longest unbeaten streak of 555 matches, spanning over five years (1981-1986).

It was a shock to the whole squash loving world when the man from New Zealand, Ross Norman, defeated a visibly stunned Jahangir Khan in the 1986 Squash World Open Final. But because it had become a habit, the Khan remained unbeaten after this match for another nine months.

That’s not all! By 1991 the ‘Conqueror’ (the literal translation of ‘Jahangir’) had won six Squash World Open titles and ten British Open titles… IN A ROW!

Not enough for you? Well… In 1982 the Conqueror created another record, winning the International Squash Players Association Championship without losing a single point.

So Time Magazine is not wrong when it says “If winning is everything, then Khan is the greatest. Period.”

Now do you think that the Woods guy (excuse me… but I forget his first name) is a more successful athlete, or for that matter anyone else? If somebody shouts ‘Hulk Hogan’ I’m really going lose it!

Deservedly awarded ‘Pakistan’s Sportsman of the Millennium’ award, Mr. Jahangir Khan retired as a player in 1993.

The Legend Lives On

Jahangir’s rise to legendary status is sort of an anti-climax when you discover that in 1979 the Pakistan selectors decided against selecting him to play in the squad for the world championships in Australia. According to them he was too weak from a recent illness. I would like to meet with these selectors and ask them just how stupid they feel now.

I am sure you now understand why the title of this blog has the letter ‘a’ omitted before the word ‘legend’. Mr. Jahangir is not just ‘A’ legend, he ‘IS’ legend and we should be proud of him.