I sometimes admire the skill of master price hagglers who can purchase items at prices that I can only dream of.  Women particularly seem to have a knack for it; just watch a hard-nosed haggler in action and you’ll see that she never goes home empty handed.  While most people like me envy hagglers, there are some who refer to them in not so endearing terms such as ‘low-baller’ or plain ‘cheap’.  Regardless of what anyone thinks, this gift has several practical applications.    Have you heard of ‘reverse auction’?  If not, now might be the time to find out. 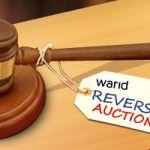 Can you imagine buying a 40 inch LCD TVfor only Rs.38/?  I know, this sounds like a fairy tale, but this is exactly what happened to Airaj Asadullah of Hyderabad.  No, he didn’t purchase a knock-off; he is the winner of the first Warid Reverse Auction!

Now you too can try your luck at buying expensive stuff for pennies.  Warid Telecom brings this opportunity to us.  Almost everybody is familiar with the traditional auction in which sellers put items up for sale, buyers bid on them and the highest bidder gets the item.  Reverse auctioning is the exact opposite of a traditional auction; in a reverse auction, buyers specify what they want and sellers compete, but in this case the lowest bid wins the business.  It has been around for almost 20 years but it isn’t as well known as the traditional auction.  It is most commonly used for procurement as a preferred sourcing strategy because it brings significant savings by reducing the cost up to 20 percent.  Initially, reverse auctioning was mostly used by industries that used parts like aerospace or auto industry.  Now it is used by all sorts of businesses to purchase everything from office products to insurance plans.   However, not all involved like this practice, especially suppliers for obvious reasons.  Just like everything else in the past couple of decades, auctions have also become high-tech.  Real-time, online bidding has turned it into a dynamic activity which brings quick results.

Warid brings us reverse auctioning with a little a twist; it’s sort of a hybrid between forward auctioning and reverse auctioning.  In this service, various products are brought up for sale every week and Warid customers are given a chance to bid.  The lowest wins the auction provided that nobody else places a lower or same bid.  All you have to do is to pick the lowest possible price (stated in paisas) for the item and SMS it to ‘3000’.

According to the rules of the game, the lowest unique bid is defined as a bid that no other person has placed and if two people have placed the same bid, it is no longer considered unique.  So you can win even if your bid is not the lowest.  Sounds confusing?  The following example might help to clarify.  Suppose you placed a bid of Rs. 5/ and with other bids it will looks like this:

You’ll be the winner because yours is the only unique bid.

There is no restriction on the number of bids a person can place.  After winning the bid, the winner can receive the purchased item by contacting the nearest Warid Business Center.  If there are no unique bids at the end of the auction, the first bidder wins the auction.  The cost of each bid is Rs. 3 plus tax.