Pakistan is home to a diverse range of flora. It also boasts the 5th largest continuous mangrove forest in the world, covering a sprawling 600,000 hectares on the coast of the Arabian Sea, from Karachi to the Indo-Pak border. This is the Indus Delta mangrove area. Around 135,000 people live around this, and most of them fish for a living. This means that the local economy greatly benefits from the mangroves, as these trees provide shelter for the fish eggs, and help in increasing the population of marine life.

The mangroves are currently threatened by the low flow of sweet water in the Indus wetlands, and over-fishing continues to disturb the delicate balance in the Indus ecosystem. Add pollution to the list of threats, and the reduction in the mangrove trees population is easily explained.

The establishment of the Rehabilitation and Replanting of the Indus Delta Mangroves (RRIDM) project has had a great impact. Efforts are now being made to conserve the existing mangroves, and also plant new ones to ensure their endurance in significant numbers. The survival rates of the saplings is around 81% and many are now thriving and fully grown trees. The additional hectors of mangroves have been planted in Karachi, Keti Bandar and Shah Bunder localities. 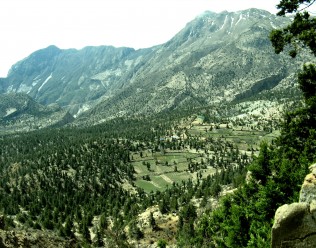 The Juniper forest in Ziarat, in the province of Balochistan, is one of the largest in the world. The Juniper trees are more than 5,000 years old, and the ancient forest covers an area of around 0.3 million acres.

With the exception of the abundant mangrove forests found in the south of Pakistan, most forests in the country are located in the north. A vast majority of these exist among the mountain ranges. Coniferous alpine forests are found in the cold regions in abundance and thrive in altitudes 1,000 to 4,000 m. Swat, Dir, Abbottabad, Mansehra and Malakand are main areas of dense conifer forests. Other species such as spruce and silver fir typically grow alongside the coniferous trees in the highest mountains, while blue pine and deodar cedar are native to the intermediate ranges. Chir pine, however, is characteristic of the areas at a lower elevation than the rest.

The sub-tropical dry forests occur in Attock, Islamabad, Mansehra, Rawalpindi and Jhelum in Punjab.  Mansehra, Abbottabad, Mardan, Peshawar and Kohat in the province of Khyber Pakhtunkhwa also house many of the varieties.

Some areas of the Himalayas receive relatively more precipitation compared to the rest of the mountain ranges due to their lower altitude. Deodar, poplar, pine and willow trees therefore comprise the forests found in the region.

The National flower of Pakistan is the Jasmine, and the tree happens to be the Deodar. Deodar thrives at 1500 to 3200 m altitude and is therefore found in the western ranges of the Himalayas. Abbottabad boasts some forests 200 to 300 years old. The trees are 40-50 m tall on average, but can reach even greater heights and the trunk of the tree can be up to 3 m in diameter. Keeping with the conditions in the north, the species is also evergreen in nature, and has needle-like leaves to reduce the loss of water. These leaves occur in dense clusters, and the seeds are winged for efficient dispersion.

The Bulashbar Valley receives plenty of rain and therefore houses a wider variety of plants than the rest of the Northern Areas. Kail, fir, spruce, juniper, birch and the Chilghoza pine are found in abundance wherever the conditions are suitable in the way of precipitation. Chitral and Kashmir are also home to 4% of the total variety of flora found in the country, and the region boasts of around 203 different kinds of plants.

The western part of Pakistan contains Juniper, salt cedar and pistachio varieties. Coarse grasses, scrub and dwarf palm characterize the trees in the Balochistan province. The dry tropical scrub and thorn forests in the country mostly consist of xerophytic scrubs. These are found in abundance in the plains of Punjab but areas of Sindh and western Balochistan contain some areas of scrubs. They are mainly used for grazing purposes, watershed protection and fuel-wood by the locals. Vann, Khejri, Kair are some of the more ubiquitous varieties. The rakh variety in the Indus Plain comprises a large percentage of the vegetation found there, and can withstand temperatures higher than 45°C. There are a number of plants and trees in Pakistan that have medicinal properties. These are used by the locals in both their indigenous forms, and also in the manufacture of pharmaceutical medicines. The species discovered so far are more than 2000 in number. One of these is the Ephedra Procera, used for the treatment of hay fever, bronchial asthma, and as a heart stimulant. Balochistan is a great source of this herb. But the full utility of these medicinal plants is still to be realised. It is reported that more than 4000 tons of oil could be obtained from the Juniper berries found in the country. Most of the plant species are either undiscovered, or not explored properly even if known. A staggering 90% of those that do get harvested is imported to other countries, undermining our own potential booming pharmaceutial industry.

Efforts are also being made to increase the tree coverage in the country. Irrigated tree plantations are currently found in Punjab and Sindh along roadsides and canals. Artificial resource managed forests also seem to be thriving at present. The Changa Manga forest in Lahore was the first of its kind in Pakistan when it was planted in 1866. The Chichawatni plantation in Sahiwal is also a notable one and the artificial forests today cover about 226,000 hectares. Shisham, mulberry, babul, eucalyptus and populus are grown commonly.

Our other forests, however, face many threats at the moment. Inadequate precipitation, pollution, erosion, deforestation and extensive cutting mean that the number of trees is decreasing faster than we can hope to replace them. And that too only if anyone actually undertakes the extensive replantation process. Around 12% of the total species of flora found in Pakistan is currently considered endangered and the number of these is expected to go up in the years to come.