There are a number of sites in Pakistan that were once home to great and ancient civilizations. The sophistication of their cultures and times can still be observed in the ruins and remains that can be found at many locations here. These are of great interest to archaeologists as they afford a view into the past and shed some more light on how life once used to be for the inhabitants of these lands.

The civilization found in Mehrgarh was amongst the first in the world to establish the practice of agriculture, keeping of livestock and organized communal life with a village structure. It lasted for 5000 years till 2000-2500 B.C. after which the ancient dwellers seem to have migrated to other areas, speculated to be Mohenjodaro and Harappa.

It was previously thought that the earliest settlements in South Asia were in Mohenjodaro and Harappa, the best known sites for the Indus Valley Civilization. However, in 1979, the timeline of civilization found in Pakistan was pushed back by more than 4000 years by the discovery of the signs of a civilization at Mehrgarh, about 30 kilometres from the town of Sibi, in the province of Balochistan. The remains are dated to 7000-9000 years ago and therefore immediately precede the Stone Age.

The timeline for this area has been divided into four to seven periods. The earliest of these is the Pre-Pottery Neolithic period of 7000 B.C. and possibly even before that. Mehrgarh was deserted between 2000 and 2500 B.C. and reused as a burial ground for some time after 2000 B.C. It would therefore make sense to say that the Indus Valley civilization has its roots here as well since archaeologists have linked Harappan genesis to Mehrgarh, after the discovery of some early indications of Harappan styles, especially the similarities in earthenware.

The Neolithic Revolution seems to have taken place around 8500 – 6000 B.C. Livestock and agriculture started and life became more settled in permanent housing. Remains of painted pottery and ornaments representing both humans and animals have also been excavated recently from the site. And in what could be one of the earliest known evidence of dentistry and knowledge of dental procedures, scientists at the University of Missouri-Columbia have found tiny, perfectly rounded holes in teeth in the region which they think were drilled to repair tooth decay. None of these come from a special tomb, suggesting that oral health care was available as a general right. 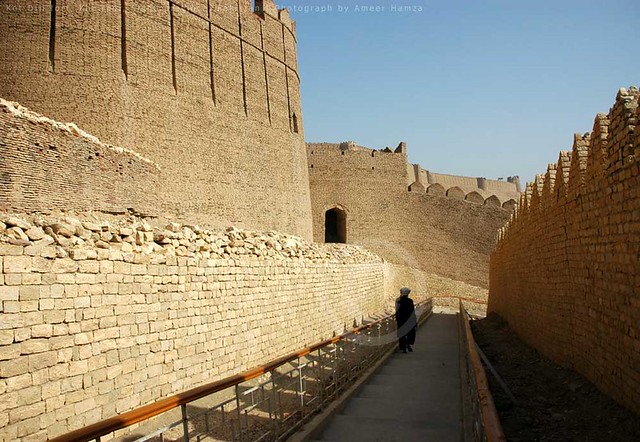 Around 3500-3000 B.C, another civilization came into being while the Indus Valley Civilization was just underway. Located about 22 km south of Khairpur in the Sindh of province, Pakistan, the Kot Dijli site is some 60 km away from Mohenjo-daro.

Excavated in 1955, the site’s culture is characterized by the use of the red-slipped globular jar with a short neck painted with a black band. During the peak of this civilization, the region was divided into two. The first part was a Citadel for the elites, separated by a defensive wall from the general public. The second was a Lower Town with mud houses. Terracotta found from this site has characteristic horizontal and wavy lines, or loops and triangular patterns. Remains of jars, balls, bangles, beads, pots and figures have also been discovered at the site.

The ancient site is speculated to have been burned down, though the reasons for this end are yet to be discovered.

The name literally translates to Mound of the Death. Situated 350 miles from Karachi, the capital of Sindh, Mohenjodaro is one of the most important archaeological sites in Pakistan. It was one of the largest settlements of the ancient Indus Valley Civilization, and one of the world’s earliest major urban settlements. The civilization existed from 2500 B.C. to about 1500 B.C. after which it disappeared. Mohenjodaro was declared a UNESCO World Heritage Site in 1980.

The citadels found here seem to have once housed palaces, granaries, and grand baths used for ablutions. The town was laid out in rectangular patterns. Houses were two-storied and had drainage systems that led into brick-lined sewers.

Trade and agriculture formed the backbone of the ancient economy. Many copper, bronze, and clay fashioned remains have been found. An important find are the seals. These are engraved with animal figures and a line of pictograph script. On some seals there is a tree or the Hindu god Shiva drawn. The script has yet to be deciphered.

It is mostly accepted that the civilization fell in 1500 B.C. to invading Aryans.

Harappa is situated 35 km from Sahiwal and around 250 km from Lahore in the province of Punjab. It was from here that the remains of the Indus Valley Civilization were first discovered that eventually led archaeologists to Mohenjodaro. Though some of the remains of Harappa were destroyed, several cemeteries have been excavated to reveal much about the Harappan culture.

Many of the dead were buried wearing a variety of jewelry and other ornaments, such as rings, along with earrings and bangles. Some of the females had anklets of tiny beads and girdles studded with semi-precious stones.

Taxila is a town situated about 32 km away from Islamabad, the Capital of Pakistan.  The name is translated to “City of Cut Stone” in Sanskrit. The civilization here is dated back to the Persian Empire in the 6th century BC. It was declared a UNESCO World Heritage Site in 1980 and in 2006 it was said to be the top tourist destination in Pakistan according to The Guardian.

Taxila can be considered to be amongst the earliest universities to ever exist. This may not be highly accurate in the modern sense, as there was no particular structure to the imparting of Education. The teachers were not paid and had complete autonomy as to the choosing of students and subjects, without any centralized syllabus or control from the ruling authorities. There were also no examinations taken or degrees awarded.

The main ruins of Taxila are divided into three major cities, and each corresponds to a different period in time. The oldest of these is in the Hathial area, which yielded surface shards similar to red burnished ware and these remains may be from an era as early as the late 2nd millennium B.C. to the 6th century B.C. The second is found at Sirkap and was built in the 2nd century B.C. The last city is situated at Sirsukh.

It is a pre-Harappan site, and dated about 4000 B.C. It is located 22 km away from Dera Ismail Khan in the Khyber-Pakhtunkhwa Province. It is considered to be one of the oldest urbanized centers in South Asia that we know of. 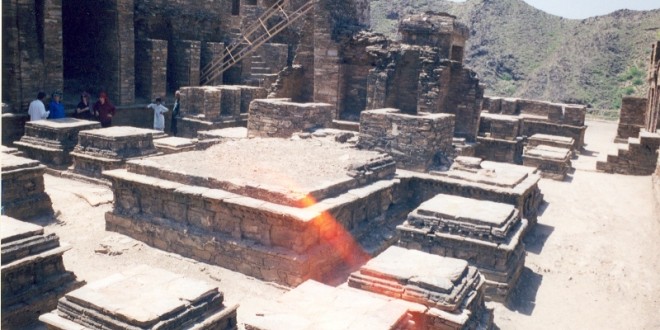 It appears to have once been a large walled rectangular city with a grid iron network. The location of a number of small-scale industrial areas can be seen occupied by eroding kilns and scatters of slag. The surface is strewn with thousands of shreds.

There are not many remains at Rehman Dheri except for thousands of broken utensil bits and stone. It seems to have been left by its inhabitants in the middle of the third millennium B.C. The plan of the Early Harappan settlement is therefore completely undisturbed by later developments in civilization that took place at the other sites and hence represents the beginning of urbanization in South Asia.