Pakistan is the 36th largest nation by total area. It has a 1,046km (650mi) coastline along the Arabian Sea and the Gulf of Oman. Pakistan is bordered by Afghanistan, Iran, India, and China. Pakistan is also very close to Tajikistan, separated by the Wakhan Corridor. Pakistan is strategically located between the regions of South Asia, Central Asia, and the Middle East. This prime location – combined with varied natural resources, a diverse geography, and interesting environment – make Pakistan a noteworthy country.

Pakistan is one of few countries in the world to have every kind of geological structure. The geography of Pakistan is a blend of landscapes. You’ll find plains, deserts, forests, hills, and plateaus. There are coastal areas along the Arabian Sea and mountains of the Karakoram Range in the north part of Pakistan. There are green mountains and dry mountains, land rich for cultivating, and waterfalls. Geologically Pakistan overlaps the Eurasian, Iranian, and Indian tectonic plates. 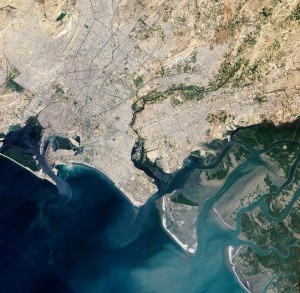 The three primary geographical regions are the northern highlands, the Indus River plain, and the Balochistan Plateau. The northern highlands include the famous K2, Mount Godwin Austen. At 8,611 meters, it is the second highest peak in the world. Pakistan is currently working to develop areas for tourists and trekking sites.

The Indus Plain is home to parts of the great river Indus. The catchment area of the Indus is almost one million square kilometers. All of Pakistan’s major rivers flow into it. The Indus River basin is a large, fertile alluvial plain. The high-quality silted land and extensive irrigation projects have made the area an agricultural destination for thousands of years.

Pakistan’s climate ranges from tropical to temperate. In the coastal south you’ll find arid conditions. Pakistan does have a monsoon season with adequate rainfall, and a dry season with less rainfall. A cool, dry winter runs from December to February. Spring from March to May is hot and dry. Summer from June to September is rainy. October and November are the retreating monsoon period.

Animal life is diverse as well. The southern plains are home to crocodiles. Boars, deer, porcupine, and rodents are common. In the north Marco Polo sheep, Urial sheep, Ibex goats, Himalayan bears, and snow leopards have been found. Sandy scrublands are home to jackals, hyena, wild cats, panthers, and leopards. Occasionally an Asiatic cheetah is spotted (no pun intended).The Markhor, a goat, is Pakistan’s national animal.

Many of the birds in Pakistan are migratory. Crows, sparrows, myna, hawks, falcons, and eagles are commonly found. Partridges are supported by crop residues and wild growth.

Pakistan’s geography, climate, and environment have shaped life in this country. Be sure to read more about Pakistan’s Natural Resources and if you’re visiting read What to Buy in Pakistan.