There have been varying reports regarding the number of journalists killed in Pakistani while reporting or those who received death threats while they covered an issue due to lack of investigation. These journalists belong to both local, national and international news agencies and media. Some of them were kept for days by Kidnappers in their own custody, tortured and then killed. 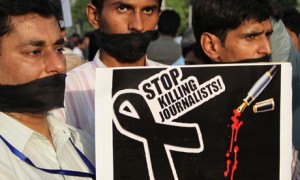 According to a report early this year in The Express Tribune, a total of 103 journalists were killed in 2011 alone. However, the figure is comparatively better than in 2009, when 110 journalists were killed on duty. Here is a detailed list of journalists killed all around the world since 1992 till 2010 by The Guardian. Having such a worst scenario for Pakistan’s local journalists, foreign reporters are also thinking twice before accepting job offers to be employed in the country as it appears in International Press Institute’s Death Watch list.

The worst part of the whole matter is that none of the journalists’ deaths have been thoroughly investigated by the police. The families of these men who were killed are still seeking justice without any hope. Even when investigations are done, they are too inadequately conducted to conclude any solid evidence and catch the culprits. Pakistan Federal Union of Journalists has not been able to do much either, except to condemn killings, rally on streets and campaign for safety. The case of Syed Saleem Shahzad’s murder in Islamabad, the Pakistan bureau chief for the Asia Times, on May 29th 2011 is still a mystery. All of the civil rights activists groups, including Human Rights Commission of Pakistan could do nothing except show concern. 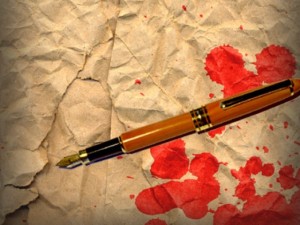 There is lack of rectification in government’s inability to accept responsibility to provide media with the freedom and protection it needs to survive. Getting news through is not just a news-media-moguls’ business, but it is important for intelligence of a state as well as for informed opinion formation of masses. Without taking any names of either channels or broadcast journalists who have undergone such treatment, it is established that banning of the media channels and media personalities is something considered by the government as its sole right. Both investigative journalism and broadcast journalism have become the riskiest jobs in Pakistan. When the government would try to hide truth from its own people, guilty route is the one it will take.

Another shocking aspect of this story is that media itself is quiet and seems fearful in raising a voice on behalf of their own. The World Association of Newspapers and News Publishers (WAN-IFRA) has found that media employees are being killed all over the world, facing physical threat and persecution of all kinds from both terrorists, criminals and even government officials for trying to expose a conflict, investigate a crime or a case. During the World Newspaper Congress and World Editors Forum in Vienna last year, the World Press Freedom Review revealed its report about how much journalists can remain out of danger to perform their duty and how much the governments support them in their cause of seeking truth.

According to the International Press Institute, the numbers are getting worse every day. Even though there are more means of getting information and news stories due to development in social media outlets, the news coverage for field journalists is getting harder to report. In 2002, there were 19 countries on the Death Watch list, this year that number has doubled to be 40 countries. The one cause to which rise in death rates of journalists could be pinned down to is the general increase in violent behavior and intolerance amidst people, both at intra-regional and inter-regional levels. Governments should provide special protection to journalists both on field while reporting and in their daily lives too.