Brief History of the SCO – Membership of Pakistan and India

The Shanghai Cooperation Organisation (SCO) is a regional alliance on political, economic and security issues formed in 2001 by then leaders of China, Kazakhstan, Kyrgyzstan, Russia, Tajikistan and Uzbekistan. An ‘SCO Charter’ explaining the alliance’s objectives and rationale was signed in 2002.

During General (Retired) Pervez Musharraf’s rule (2005), representatives from Pakistan and India participated in the first SCO summit at Kazakhstan, alongside those of Iran and Mongolia. Later during former Prime Minister Nawaz Sharif’s government (2017), Pakistan and India both were inducted as full members of the alliance.

SCO-RATS organised its first proper cyber exercise “Xiamen-2015” (October 2015, Fujian province of China) simulating a fictional scenario in which an international terrorist organisation encourages supporters and followers to execute terrorist, separatist and violent extremist activities across SCO member states. The exercise and its implications were examined in great detail in an earlier report by Pakistan Insider.

National Security Council (NSC) of India is presently led by Ajit Kumar Doval, the notorious retired Indian Police Service official who is known for his ambitious external-focused policymaking . In late 2018, during Prime Minister Modi’s previous tenure, the NSC was revamped to boost its administrative oversight of initiatives. Prominent changes included appointment of two additional Deputy NSAs namely former R&AW chief Rajinder Khanna (external and techninal intelligence issues) and former Indian Ambassador to Russia Pankaj Saran (diplomatic affairs).  NSCS was alloted a meagre budget of 5-6 million US Dollars in 2016-17 period which has been massively increased to more than $45 million from 2017 onward.

Ambassador (Retired) Pankaj Saran has effectively played his role in securing India’s strong foothold in SCO, in due part owing to his rich diplomatic experience of prior service in Russia and the US. He has been New Delhi’s most critical point-man for keeping relations with Russia undisturbed because of Washington’s growing Indo-Pacific cooperation. During his assignment to Russia in 2017, Ambassador (Retired) Saran discussed South Asia’s political-military dynamics with his Russian hosts on several occasions, including discussions with then Deputy Foreign Affairs Minister Igor Morgulov about Indo-Russia collaboration in the SCO. 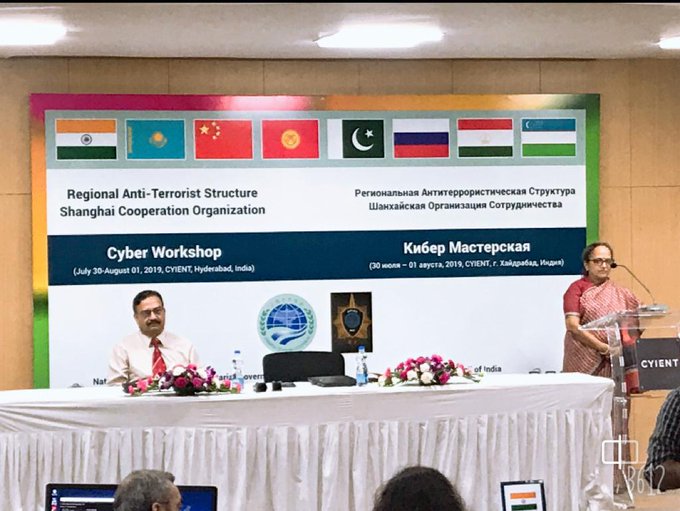 But lest we forget, Lt Gen (Retired) Dr Rajesh Pant is also another important official in this achievement. He was Commandant of Indian Army’s Military College of Telecommunication Engineering (MCTE) and after retirement joined Precision Electronics Limited as its Chairman. Prior to his current portfolio, he was appointed Officer on Special Duty (OSD) at the National Cyber Coordination Centre (NCCC), a highly-secretive Indian government entity which collects and distributes critical cyber intelligence among various state organs. He possesses rich experience in Electronic Warfare and Cyber Warfare.

Whatever the reasons may be, Pakistan’s absence in the cyber workshop is to its own detriment. This is not SAARC where a combination of less-to-moderately influential states are involved. The SCO has overwhelming patronage by China and Russia; their convergence for the pursuit of common regional aims is extremely significant.

That India, despite having security or geopolitical tussles with China, has earned the trust of Beijing to send its delegation and take the mantle to lead SCO’s cyber affairs speaks volumes about how the framework for regional cooperation is evolving. Land/ border disputes, aggressive military posturing and political show-of-force aside, New Delhi has committed itself to regional fora without hesitation, in parallel to its ongoing efforts through BIMSTEC and with ASEAN.

It seems that Pakistan has secluded itself in its own backyard, for reasons not known or understandable publicly. There has been prolonged silence on anything related to SCO from the Foreign Office.

There is one plausible explanation: The Ministry of Interior which oversees federal law enforcement agencies has been entrenched in domestic politics and, to an extent, internal security. The Defence Minister is nowhere to be seen. The Foreign Minister, meanwhile, has his eyes set on India on the one hand (post Balakot) and lobbying for greater access to European and Middle Eastern capitals for necessary anti-corruption investigations in conjunction with NAB.

India continues to reap benefits from the SCO with little to no competition from Pakistan, which has already a golden opportunity to lead efforts for intra-regional law enforcement collaboration in cyberspace. Familiarisation with common operating practices involving digital forensics, cyber crime intelligence analysis and lawfare would have given Islamabad critical insights into the technical competences and capabilities of SCO member states. Legally and diplomatically, New Delhi could not have imposed restriction on a Pakistani delegation to attend the workshop in India. At the very least, China would have pushed India to accept Pakistan’s participation or influenced the SCO Secretariat to change the host country.

It’s about time that Ministry of Foreign Affairs’ efficacy be scuritinised; the diplomatic machinery continues to rot in reactive mode. There is either a lack of policy guidance from the top or the concerned section dealing with SCO isn’t doing its homework and follow-up properly. The country’s senior FSP cadre needs a jerk to come back to senses.