I believe it was the early 2000’s when we first heard of free media in Pakistan. The credit went to the then President, Mr. Musharraf who liberalized the industry. Ironically the same media played a humungous role in his own down fall.

Back then there was a kind of jubilation and everybody felt very lucky. Pakistanis now had a new and very potent platform to express their views and project themselves, especially to face the ever-growing Indian media clout in Pakistan. I remember thinking that this was a giant leap for Pakistan. No doubt we were late to step into this arena but we were finally there!

I don’t know if anyone of you saw the documentary on Geo about life in Karachi where they took the camera to a beach party. Liberal was an understatement ;). On the other hand we also had the Aalim’s and naat khwaan’s getting their gig’s on air. It was pretty balanced and our media was thriving.

But like everything else in Pakistan, what seems too good to be true usually is! It’s the simple case of power corrupts and absolute power corrupts absolutely. That’s what happened to our media, especially the journalists. As soon as they realized that they had now become opinion makers and could influence anything under the Pakistani sun, they began taking things a bit too far.

Remember the CIA Hosted Drink and Dance Party For Pakistani Journalists at US Embassy Islamabad? Harmless on the face of it right? But when you think about the clout that the CIA could then have over these journalists the fog begins to clear and the actual picture forms.

Then you have the infamous Aalim Online scandal. I personally loved that video. The guy has a knack for abusing. The flow, the sentence structuring and the delivery was superb! Bravo! 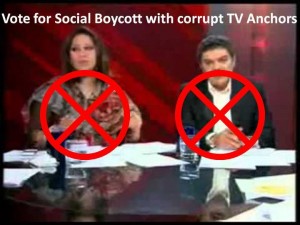 And finally now you have the oh-so-recent “Mediagate” scandal. This scandal disgusts me to the core, even more than political scandals. Unlike politicians these are the very people that we love and follow and they stab us in the back!

A lot of people must have been thinking…’Yaaaawn! Another one of those scandals, give it two days to die down‘. But the fact of the matter is that this one is more dangerous than any other scandal. Scams for money hurt our economy and pocket, but these people affect our minds. I would go as far as to say that this should be a kind of treason. Don’t think so? Tell me this, when the memo was written to America to stop a coup what was that? Treason, right? Then how about a person who manipulates people’s minds on the order of anti-state elements or criminals that work against the system. I say treason! There is no way to know it’s happening or even stop it.

Just think about it. What’s stopping journalists taking dictation from say the Taliban, America, RAW, or Mossad? Nothing at all, if all they want is money.

Some of you might be saying ‘But doesn’t this happen in developed nations too? Aren’t news channels like CNN or Fox biased?‘ Yes they are, but they are also held accountable for crossing the line. Remember News of the World anyone?? Compare that with Pakistan. Meher bukhari still has her show, so does Kamran khan and Hamid Mir and I’m ready to bet that soon Mr. Mubashir will be back on another channel, with a brand new show.

I don’t know about you people but I for one won’t believe a word these journalists say….ever!