I grew up in the United States where religious programming wasn’t as much religious as it was a setup for asking for donations from television viewers. Sermons crafted to motivate the viewers for donations would start innocently with dreams of building a church for followers to come on Sundays to hear the Word of God. Over time, however, the requests turned into opportunities to sell sermons on tape, books that the minister had written, promises of prayer for healing, wealth and success from an “army of believers,” and to build larger churches. Religion became commercialized and the Word of God became a vessel to generate huge amounts of capital to fund lavish homes, private jets, large campuses for teaching and, for many, extramarital affairs that, when made public, destroyed the ministers and their churches.

For the last 12 years, since the media gained its “independence” in Pakistan, we have seen the proliferation of more and more religious programming on our TV channels. What was once cordoned off to the religious channels has now become mainstream and imams are becoming famous, much like the televangelists of the United States. One anchor has changed channels five times for “better packages” and higher positions within a single media house. Another was chased out of the country because his teachings didn’t fall in line with the mainstream on-air personalities. My fear is that we are headed in the same direction as the United States with our religious programming, but that is not the only issue.

With the sheer number of people that are sitting at home, frustrated with the direction their lives are taking, they are turning more and more to calling in to the on-air personalities for solutions to their problems. Now, I am not saying that there are not good imams on television, but who is really to judge who is good and who is bad? Are we really able to decide which one is giving us true advice from the Holy Quran and Hadiths and who is adding their own flavor and ideas to craft a message that will connect with the caller and other viewers that are watching? Add to this the soothsayers that we find on the morning shows performing exorcisms, healings and pronouncing random fatwas and the country is headed toward a religious schism that will tear us apart. 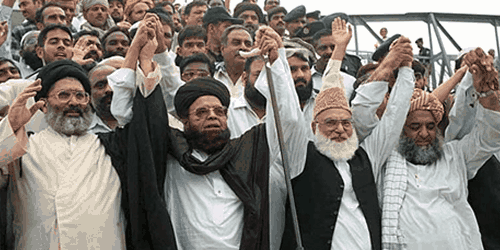 The political imam leads, or is a member of, a religious party and is constantly telling us that we need to embrace Sharia to solve our national problems, which would not be an issue if their own lives echoed the words that they speak. Most of our political imams are living in lavish homes, driving vehicles that only industrialists can afford and beating the drum of fundamentalist Islam, which pushes us backward. These political imams are also the same that will scream from the mountaintops that the terrorists and extremists are justified in their actions because of the state of the country. We are immoral because we watch lewd programs on television and in cinemas. We are corrupt because we don’t stand up to the people who steal from the country. We are wajib-e-khatal because we did something that they perceive as wrong. It’s amazing that an entire nation of sinners are still alive when we listen to them speak.

Interestingly, these political imams will not resist favored positions in the government, parliament and institutions, nor will they speak out against any politician or bureaucrat that violates the principles of Islam that they thump on their chests. How many videos have we seen of politicians incorrectly reciting surahs and kalimas during cabinet meetings? Which imam has demanded that they be removed from their position or the parliament? Political imams speak only when told to speak, condemn only when told to condemn and praise when told to praise. I recall one of these political imams boldly declaring that “if a dog is killed by America, it attains the status of Shaheed,” while another declared that “no member of the Pakistan Army would be considered a Shaheed if they died fighting the terrorists” – the terrorists being Allah’s warriors instead of a Muslim Army.

I won’t even discuss how they supported, and continue to support, the Lal Masjid brigade, calling them the victims of the Army’s aggression. No, we didn’t watch their antics and violation of the law on television ourselves. No, the media lied to us. The General lied to us. They are the innocent victims.

This is the political imam. 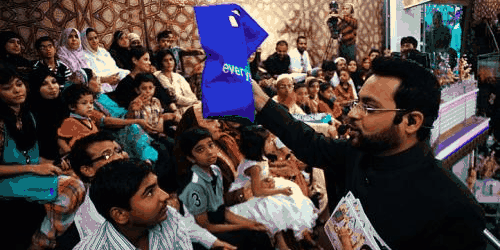 The ratings imam is all about getting people to watch their program over every other on-air imam. We are seeing this more today, during Ramadan, as every channel has spent millions on building lavish sound stages for celebrities to spend hours before Iftar and Sehri telling us that we need to follow the Prophet Muhammad’s example (PBUH), all while running around the stage giving away gifts through contests that have nothing to do with learning the religion that we claim to follow. And there are thousands of sponsors that provide gifts, clothing, Iftar boxes and other things to help these shows run, all in return for a mention of their brand name during the program by the celebrity hosting the program. Let’s forget the hundreds of thousands of IDPs that don’t have a place to live or food to eat because they made the sacrifice for the future of Pakistan. No, let’s spend lewd amounts of money decorating a set and securing gifts for people that go home to four walls and a roof over their head. Apologies but I thought that Ramadan was about sacrifice and learning the conditions others live with each day. 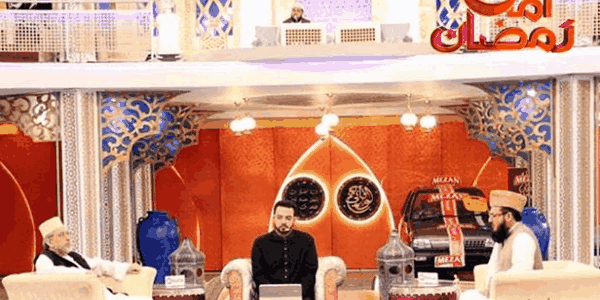 Are you honestly going to tell me that this is what the Prophet (PBUH) would have done if He were alive today? Can you show me in the Holy Quran and the Hadiths where the Prophet or any of his followers behaved in this manner?

We also see the ratings imam outside of Ramadan, hosting their own hour-long program and being a guest on talk shows to discuss how Islamic values have left our society. This is when the ratings imam converts into the “I know better” imam. Surrounding themselves with other like-minded people, they spend the hour trying to convince us, the sheep, that they know better than every imam we have ever listened to from our parents and first Islamiat teachers to the imam that gives the khutba on Friday in our mosque. And, of course, they will take calls from individuals who are struggling with issues ranging from marriage problems to financial ones, and everything in between. It’s what I call sound-byte Islam. “A surah here, a kalima there and Allah will make it all better,” they will tell the caller, intermingled with a story that will support the solution they are offering. Sound-bytes from a religion that is laced with history, tradition and understanding, and we wonder why so many of our Muslim brothers and sisters are confused and easily misguided by politicians and extremists alike. 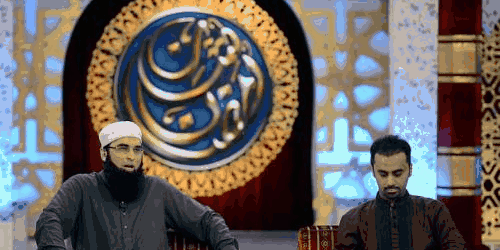 The “I know better” imams have also emerged in a more destructive form. They have a rudimentary understanding of Arabic, have become a Hafiz and now recite passages without delving into the history, tradition and context of what the conditions were at the time. This has created a group of believers that are more superficial in their beliefs. This superficial belief exhibits itself in the followers growing beards and looking down on those who don’t. They wear burqas and hijabs while judging those who don’t. It exhibits itself in people running around with the pants pulled up to mid-calf even when they are not offering prayers. This form of Islam, which is all about the outward show, is a direct contradiction of the teachings of Islam. It is interesting to note that the Prophet’s followers wore shorter robes during that time because in Arabia, the length of one’s robe was used to denote one’s wealth – a outward display that went against the teachings of Islam, where all men were considered equal, regardless of material possessions.

Now that you know the tale of the three imams, my advice to all Muslims – turn these people off.

The Quran tells us that the Word of Allah has been made easy for all to understand. The Quran is meant to be read and understood by all of us as individuals. The concept of ‘priesthood’ (or Imamhood, as it were) has never existed in Islam and we should not allow it to flourish now. We are all capable of reading, understanding and applying the principles of Islam to our own daily lives. We are expected to do so. It is why reading the complete Quran is a mandatory part of being a Muslim.

We must also read our own history – each surah in the Quran was revealed to address the adversities faced by Muslims at the time of the Prophet and we must know what those situations were. And we must use our own knowledge and logic to apply the tenets of Islam to modern times and to follow the religion to the best of our abilities. Because at the end of the day, the common thread that is the backbone of Islam is moderation. The basic principles are the principles of humanity: truth, fairness, justice and peace.

For us to stop being sheep and start being the lions of Islam, we must know our own religion and be so immersed in these basic principles that others will want to follow Islam because of our ACTIONS, not our words.