260s are the targets which got to be chased in One Day Internationals particularly when they are played in subcontinent-esque conditions. Pakistan were humbled 130 all out in pursuit of target of 261 set by England in 1st ODI of four-Match series at Abu Dhabi. Their bowlers, spinners in particular, did not perform that bad. It was their batting which did them all humiliation.

Irony is teams strengthen the department where they are infirm but Pakistan, in second ODI, further curtailed their batting, the weaker department, by replacing Shoaib Malik, a player who can bat, with specialist bowler Abdur Rehman, whose inclusion meant Pakistan would, this time, reduce England for runs 10 less than of first ODI total but that specialist bowler would, later, score 1 off 12 balls when 44 were needed to win off 34 balls. Last time, I witnessed such a horrible display of batting was 1 run off 9 balls by Rana Naveed and 4 off 19 balls by Wasim Akram.

Pakistan lost the second ODI by 20 runs and just before it happened their number 8 batsman batted 12 balls for nothing. Now spare a thought for a team-member who could bat in late order and also bowl even as an opening bowler. Had those 12 balls been faced by Hammad Azam -who came of age playing such innings in chases during U/19 World Cup 2010 – the result would have been totally different.

In third ODI during their tour to West Indies last year, in chase of 172, Pakistan were reduced to 12 for 3 and then 49 for 4 but Hammad Azam’s effort of 36 and his partnership with Misbah-ul-Haq of 78 runs assured Pakistan will neither lose match nor will they let slip a chance to get unassailable lead of 3-0 in five-match series. Azam, after that match, wasn’t given proper chances to prove his worth.

Beyond any shadow of doubt, Hammad Azam deserves to be in this team which badly needs a batsman in their lower order. Moreover, he can also play as second seamer along with Umar Gul. Azam had to be selected in place of Aizaz Cheema in second ODI. Abdur Rehman’s inclusion in place of Shoaib Malik was, also, a fine move as England batting is prone to surrender against spin. 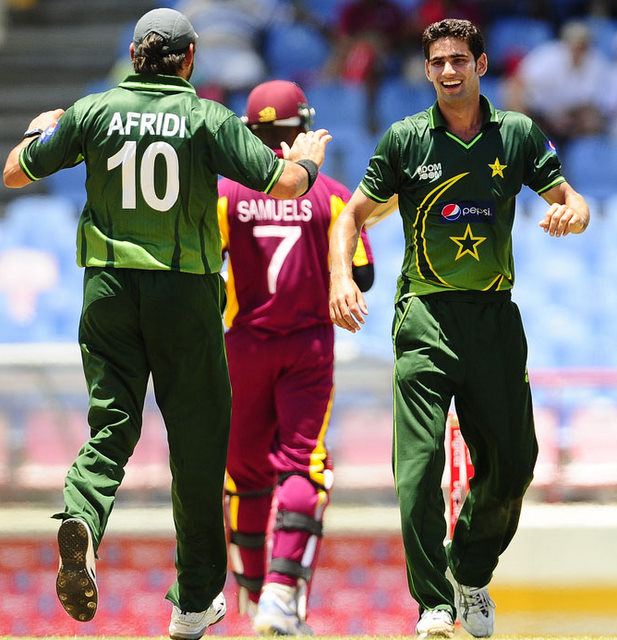 A Number 8 batsman batted 12 balls for one run in Pakistan's second ODI loss. Spare a thought for someone like Hammad Azam who could have altered the result in those 12 deliveries. (Photo Credit: Emmanuel Dunand/AFP/Getty Images)

Influential players Shoaib Malik and Imran Farhat must be cut off sooner rather than later to make way for the deserving ones. Calling for Farhat’s head, at the moment, after his 47 in second ODI, might sound harsh but in broader spectrum of Pakistan’s interest: Asad Shafiq should have not been dropped and could have been asked to open the innings.

Farhat’s 47 will give him some sympathies and might distract many but with foresight of better option, Asad Shafiq or Azhar Ali as opener, he will have to pave way for them. Leaf can be taken out from India’s batting-order which – to accommodate and build up, for future, the trio of Suresh Raina, Virat Kohli and Rohit Sharma – leaves either Virender Sehwag, Gautam Gambhir or, even, Sachin Tendulkar. In World Cup 2003, Andy Bichel, selected in place of injured Jason Gillespie, grabbed 7 wickets against England and scored match-winning 34 but Ricky Ponting made it clear should Gillespie get fit Bichel will be dropped as Gillespie at any day was better option than Bichel.

Misbah-ul-Haq must realize the role of other players and their prospects before getting distracted by Imran Farhat’s 47 off 71 balls. Asad Shafiq doesn’t deserve to be dropped and Azhar Ali, too, has shown glimpses of ODI batsman. Asad, who has opened before for Pakistan and also for his domestic teams, must go as opener with Mohammad Hafeez while Azhar, Younis Khan, Misbah-ul-Haq, Umar Akmal must develop the middle-order and Hammad Azam, Shahid Afridi the late order.

Afridi, Saeed Ajmal, Abdur Rehman are to play role of the three major bowling options and the remaining 20 overs can be shared among Mohammad Hafeez, Hammad Azam and Umar Gul.

Dream of winning ODI Series against England is dead. All Pakistan can do is salvage pride by winning next two games to square the series 2-2, the result they achieved in their visit to England in 2006- first match of 5-ODI series was washed out, next two were won by Pakistan and other two by England. Right combination in coming Twenty20 internationals will also give Pakistan a chance to become Number two in ICC Twenty20 Rankings provided they drub England 3-0. Pakistan have not won an ODI Series against England since 2005 and a Twenty20I series since 2006, which was also Pakistan’s maiden Twenty20I series.

After an emphatic and vivid Test series win (3-0) against England, Pakistan have started limited-overs leg in doldrums but raising doubts on Misbah’s ability to lead ODI Team will be quite presumptuous as, under his leadership of late, Pakistan won ODI series by 4-1 against Sri Lanka, a world cup finalist, and also clean swept Bangladesh – who does surprise visitors at their home – without any major hiccups.

It’s the selection where Misbah needs to be ruthless and not diplomatic. Neither it was his defensive batting which cost Pakistan second ODI nor that careless shot by Shahid Afridi, as expecting Afridi to play defensive is as illogical as asking Misbah to get aggressive. That’s how they both have won matches for you in past. An over ago, Afridi – with that Six and Four off Samit Patel’s bowling- was hero and had he connected couple of such shots in Anderson’s over, he would have been a superhero. He had to take risk to dwindle the asking rate.

It was team selection which was perpetrator and this issue, seriously, needs to be fixed. An all-rounder who can bat must be inducted in. Hammad Azam, in all likelihood, is a perfect choice. Deserved players deserve to be in team. Nepotism has to end.