The Pakistan National Cricket Team is an international cricket team representing the country of Pakistan, and is administrated by the Pakistan Cricket Board aka PCB. Pakistan are the 1992 International Cricket Council (ICC) World Cup champions, ICC U-19 Cricket World Cup champions of 2004 and 2006, and are also the winners of the2009 ICC World Twenty20. As Pakistan once again takes center stage Wednesday, February 23rd at the 2011 World Cup, Pakistani fans wait with bated breath.

Since their successful World Cup campaign in 1992, Pakistan cricket has been through some challenging times. Although Kenya will be somewhat hurting from their loss in the opening match against New Zealand, Pakistan has had some confusion over team and captaincy selections and have lost more than they have won in the last 12 months. Pakistan did, however, pull out a win over Bangladesh in warm-ups – but then lost to England. Fans remain hopeful though, and remind critics that Pakistan have come up with some of their best performances when it was least expected.

For the first time since 1999, Pakistan is bringing genuinely fresh personnel – eager players ready to make a name for themselves. Coach Waqar Younis praises his team and is enthusiastic about their talent. “We have such players like Ahmed Shehzad, who has played two very good knocks, and I hope that Umar Akmal, another youngster, can come good here. Younis [Khan] is in good form. We have Wahab Riaz, who we hope will do well.” Younis adds, “We have got a good blend, good spinners, fairly good fast bowlers. All that matters is that we click at the right time.”

Younis has mentioned his concern about the team’s inability to finish off close games, or longer contests such as bilateral series; but he remains confident it’s an area they can improve. Of their 10 losses since Younis has taken over, 3 have been by 24 runs or less. Younis is understandably wary about the match-up with Kenya, but he states that his team will not take anything lightly, and will go out to win every match.

Pakistan’s upcoming game on Wednesday will be their first international match since Salman Butt, Mohammad Asif and Mohammad Amir were banned (10, 7, and 5 years respectively by ICC) from the game for spot-fixing. Pakistanis are trying valiantly to move on, but reminders constantly hang in the air. Coach Younis was reported saying, “We all know that we’ve been through tough times but that doesn’t mean we don’t have talent. We are good enough to beat any team on our given day. I don’t think anybody is even thinking about match-fixing or spot-fixing. We all are geared up because it’s a great tournament.” Younis encourages his team to stay away from the newspaper and TV, and just stay focused on the task at hand.

Shahid Afridi, World Cup captain, agrees with Younis and says that his teammates are united in their goal to keep their eye on the cricket. “We’ve gone through a very tough situation.” Afridi said. “As a captain I’m very happy because we were trying to rebuild the team and boost its morale. The team has gelled. We keep these (controversial) issues out of the team and we are focused on the cricket … We played well in New Zealand and the boys are united and they feel hungry.” 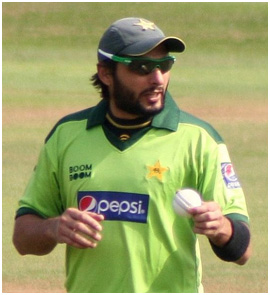 Afridi has scored three of the top six fasted centuries in ODIs (One Day Internationals), including the fastest which was made in 37 balls. He has had 288 sixes in ODIs – the most by any player, and is one of only three players who have scored more than 5,000 runs and picked up over 250 wickets in ODIs.

Now is not the time to underestimate Pakistan. Many feel this World Cup will be a defining moment for Pakistani cricket, and believe that a win would bring more than a trophy back to the country. Prominent player Shoaib Akhtar stated, “Pakistan needs to win this World Cup to bring back cricket to Pakistan, the charm back to the country. People of Pakistan are missing cricket, they are dying to watch players from all over the world playing against Pakistan.”

Perhaps this is the year they’ll have that chance.