We’ve all known about Boom Boom for some time now, but the new sound coming out of the Pakistani camp and Pakistan is Tuk Tuk!

I’m sure you get where I’m coming from. For those readers who just got back from Mars, Tuk Tuk and Boom Boom are expressions that tell you about the batting style of a person (umm… in a sport called cricket!). Usually used by Pakistani’s for describing Pakistani cricket players, both styles of batting have their followers.

This style is where the batsman stands at the crease with patience, being defensive more than aggressive, taking more singles than boundaries.

Cons: Slows the innings down; puts pressure on the next batsmen; and because of low strike rate, has little entertainment value.

The style where the batsman just can’t wait to swing the bat and send it out of the stadium; A more aggressive approach where one plays mostly to the ropes.

Favorite shot: the “andha dhun” swing of the bat

Pros: Un-nerves bowlers; boosts the score instantly; eases pressure off the next batsmen (if a decent score is made); best part: very entertaining.

Cons: Unpredictable; more often than not, the person scores very little; puts pressure on other batsmen if you get out quickly; no technique. 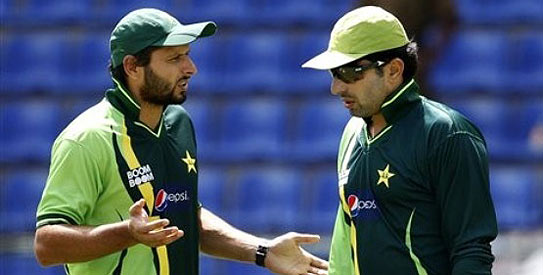 Tuk Tuk has come under fire recently due to Pakistan’s really bad performance in ODI’s and T20 against England and the slow paced innings. On the other hand, what people fail to consider is did any of the Boom Boom protagonists do any better? At least the Tuk Tuk’s scored.

One very insane argument that you often hear is that Tuk Tuk playing puts pressure on the innings and the remaining batsmen can’t cope with it. Well, what do you have to say when the Boom Boom’s make 15 runs off 10 balls and get out playing a mind-bogglingly stupid shot? Does the fall of quick wickets NOT put pressure on the team?

Tuk Tuk’s are usually found in the middle order. And this in my view is the most pertinent style for them as the field is spread, there is usually no power-play, the spinners are on…stroke play is what is required and not crazy play.

The New Vs. The Old

Boom Boom is the new cricket, but in my view it’s only effective when executed sensibly, or in T20. The perfect example of this is Virat Kohli. There is nothing Tuk Tuk about him, but his Boom Boom is well crafted and sensible. That is what is required! Our Boom Boom’s are all just hot air now.

All this might sound as though I hate the Boom Boom’s, but that is not the case. I believe Umar Akmal has exceptional talent (unlike his brother) but needs a cool head to shape it to success.

Tuk Tuk, as you all know is the traditional way of cricket. This is what Pakistan needs today. The results speak for themselves; other than that weird England series, the last year was very good for Pakistan. Right now the men in green need to stabilize further and sail smoothly till the next world cup. This is not something Boom Boom will be able to deliver, especially with South Africa and Australia to be played this year. I believe Pakistan is on the right Tuk for now, the Asia Cup being another testament.

I suggest we continue with this till we regain our lost glory and then Boom Boom the @$% out of everyone!