Pakistan is home to many significant historical sites that reflect the traditions and customs of times past.  Although historical sites are of special interest to archaeologists and history students, tourists enjoy visiting these interesting places as well.  The fascinating cultures and beautiful scenery lure countless visitors each year.

Located about 200 km from Lahore in the Montgomery District of Punjab, Harappa is the site of an important ancient settlement of the prehistoric Indus Valley civilization, dating back 5,000 years.  Excavations, which began around 1920, revealed a civilization which was excellent in town planning and other aspects of everyday life.  The city had drinking water wells, and a highly sophisticated system of waste removal.  All houses were equipped with latrines, bathing houses, and sewage drains which emptied into larger mains and eventually deposited the fertile mix onto surrounding fields.

The Harappans were an agricultural people whose economy was predominantly dominated by horticulture.  Massive granaries were built at each city, and experts agree there was most likely an elaborate bureaucracy to distribute the wealth of food.  The Indus River valley is relatively dry now, but apparently it was quite wet when the Harappans thrived there.

Historians and archeologists flock to the museum to see rare artifacts from the Indus Valley civilization, including terracotta toys, animal figurines, and bronze utensils. 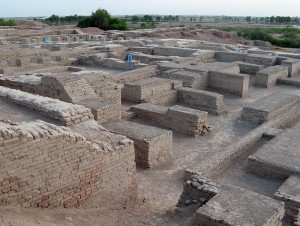 Indus expert Gregory Possehl of the University of Pennsylvania says the city was among the most important to the Indus civilization.  It would have dominated the major trade routes and agricultural potential of the southern Indus plain from approximately 2600 to 1900 BCE.  Although it lacks palaces, temples or monuments, the city’s wealth is evident in artifacts such as ivory, lapis, carnelian, and gold beads.  A watertight pool called the Great Bath, held in place with walls of baked brick, is the closest structure Mohenjo-Daro has to a temple.  Nearly every house contained a bathing area and drainage system, and wells were located throughout the entire city.

A miniature bronze statuette of a nude female, known as the dancing girl, was discovered in 1926.  Other historical finds include stone sculptures of seated male figures, such as the intricately carved and colored Priest King – so called even though there is no evidence he was a priest or king.  A visit to the museum of Mohenjo-Daro provides little in the way of facts, but many fascinating artifacts.

30 km northwest of Rawalpindi lies Taxila, one of the most important archaeological sites in Asia.  Historians date Taxila between the 1st and 5th centuries AD and believe the city flourished economically and culturally.  Taxila includes numerous buildings, fortifications, monasteries, and settlements.  Taxila was the capital of the Buddhist kingdom of Gandhara and an educational center.  Visitors will be struck by the massive Buddha and enjoy seeing other Buddhist monuments throughout the valley.

More than 50 archaeological sites are scattered in a radius of 30 kms around Taxila, including Bhir Mound, Sirkap, Jandial Temple, and Dhamarajika Stupa and Monastery.  The sites in and around Taxila are nicely preserved, making it easy for visitors to imagine crowds on the streets, priests in the towering stupas, and worshippers in the monasteries.

Pakistan has many other sites of historical importance, such as Takhti-i-Bahi, a Buddhist monastic complex; and the Tomb of Jahangir, a mausoleum built for the Mughal Emperor Jahangir.  Each of the historical sites of Pakistan tell fascinating stories about the peoples who lived thousands of years ago.  Archaeologists continue finding new discoveries every day, helping us to learn about these ancient civilizations and the impact their culture has on our modern world.