Stronger Pakistan-Sri Lanka Ties A Guarantor Of Peace In Asia

Pakistan and Sri Lanka are two important South Asian nation states, even more so because of their unique geostrategic locations. Pakistan is the Indian Ocean’s transit route to Afghanistan and Central Asia and eventually Europe, whereas Sri Lanka lies near major sea lanes in the Indian Ocean Region (IOR). Thus, the tiny island state assumed greater importance in the context of maritime trade and combating privacy. Little wonder why China is investing in a new port near the capital Colombo and further desires establishing a Free Trade Agreement with it as part of its ambitious ‘One Belt One Road’ geo-economic project.

Sri Lanka, formerly known as Ceylon, established bilateral diplomatic-cum-trade contacts in 1948. But more than its soft power contribution, Pakistan is revered by the island state’s government and citizens for its military and security contribution in defeating the Liberation Tigers of Tamil Eelam (LTTE), popularly known as “Tamil Tigers” who were sponsored by India. The Sri Lankan Armed Forces hold their Pakistani counterparts in great esteem, often inviting army chiefs to address officers undergoing training in their military institutions. Naval ties are assuming increased significance among mutual defence ties because for Sri Lanka, sea power holds primary importance over land and aerial warfare. 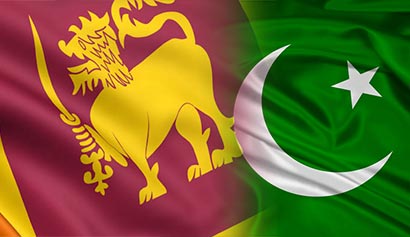 One of the most notable outcome of the Prime Minister’s recent visit to Sri Lanka is that Sri Lanka has signed an agreement to purchase 8 (eight) JF-17 Thunder fighter jets jointly manufactured by Pakistan and China. Known for its agility and precision-strike capabilities, the Thunder was rumored to be on the island state’s cards for a while with some news forums publishing stories suggesting that the Indian military establishment was trying to divert Sri Lankan attention to their own indigenous aircraft as procurement options.

Then there are also the strong ties established through sports diplomacy via cricket. The 2009 attack on a Sri Lankan cricket team in Lahore sent shockwaves across the world but Sri Lankan government and its people stood firmly with their Pakistani friends. The statements by Sri Lankan cricket officials at the time were encouraging.

Following are some of the highlights of Pak-Sri Lankan ties since the dawn of the second millennium:

With China rigorously working on the China-Pak Economic Corridor (CPEC) in Pakistan and pushing for increased assertiveness in the IOR, Pakistan and Sri Lanka stand to benefit as strong Chinese allies as guarantors of peace in the region’s waters, besides ensuring that no single country of strategic bloc establishes its hegemonic monopoly over maritime trade.

This was elaborated by Prime Minister Sharif during his address on January 5 at the Lakshaman Kadirgamar Institute of International Relations and Strategic Studies:

Sri Lanka enjoys a key position in the Indian Ocean and has much to offer in terms of maritime cooperation and maintenance of peace and security in the Indian Ocean region. Pakistan desires enhanced maritime cooperation with Sri Lanka and seeks increased engagement between the armed forces of our two countries. Pakistan will continue to offer training facilities to the Sri Lankan Armed Forces, police and other institutions.

The Beijing factor will go a long way in further cementing Islamabad-Colombo ties for peace and prosperity in South Asia.