Recently, the 57th Idea Filmfare Awards were held in Mumbai’s Reliance MediaWorks Studios on January 29, 2012, Sunday, where all of Bollywood’s glamour and glitterati were present to receive and give praise to each other’s work of the past whole year. Invited to the ceremony were major celebrities as it is considered to be the ‘mother of all awards’ in the Indian film industry. To make an impact a lot of the big names make appearances to ensure they don’t miss out this night of celebration and its media coverage. Filmfare Awards are handed out by India’s entertainment magazine of the same name which is standardized as ‘numero uno’ and belongs to The Times Group. Termed as the Black Lady, it is equivalent to Hollywood’s Oscars.

Ali Zafar who has managed to coin himself a recognizable name amongst the talented pool that make films in Bollywood, has been warmly received for his work by Indian fans. He performed and also hosted the segment of technical awards. But when the ceremony was broadcasted by the Sony Entertainment Television India, who hold the sole copyrights to telecast the event, his performance was cut out. Now there is no way of seeing Ali’s performance of the event as there is no clip anywhere else. 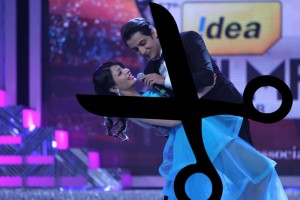 It is true that awards ceremonies do often run a little longer than their usual time and this particular one was no different. Aside from editing out the unnecessary length of the proceedings, it is hardly ever happened that a whole performance of a major star performer would have been edited out. Then why such an approach to Ali Zafar’s appearance? Is it because of his nationality? Does it boil down to the notion that India might actually be hesitant to highlight Pakistani talent?

It is obvious that Ali who has been humbly excited to have received such attention from the Indian film industry was also waiting for the ceremony to be broadcasted. On February 19, the day of the broadcast, he retweeted from Ali Zafar’s Official Fan Club Twitter account that said:

“2012 FilmFare Awards will be telecast today on the Sony Entertainment TV on 8.00 PM”

Being a hard working actor, he had been busy on the Sunday. He tweeted:

“Yet another working Sunday. But success achieved without hard work has no taste for me. So relishing my taste buds.”

But it does not mean he was not following the ceremony. He then tweeted graciously to his fans to ease their disappointment:

“Sorry to disappoint guys. The performance was edited out. But don’t stress. Whatever happens, happens for a reason. Life is an award in itself.”

There has not been any mention of Ali Zafar’s performance in the Indian media the following day and neither of the fact that it was edited out. The sponsors of the event and the television show made no explanation as to why they did this? For an artist who is dedicated to his profession and works committedly, it is unbelievable to be given such a treatment by Bollywood’s most commericialised, most telecasted and most coveted award function.

To go with the hype of different celebrities performing, Filmfare tweeted on January 28 about Ali’s rehearsal saying:

“… Ali Zafar [is] perfecting his pitch.”

Then on January 29, the day the ceremony was held, the Filmfare’s Twitter account updated throughout the evening as to what was happening. Keeping its Twitter followers posted, it said who is getting an award right now and who is performing. It mentioned most, but again missed out Ali’s performance and his hosting duties that he delievered along with Ankita Shorey, the 2011  Femina Miss International.

Instead what Filmfare did was to retweet from Raghuvendra Singh that said:

Despite all the wonderful utilization of Pakistani artistic talent by Bollywood, it is still a bit reluctant to give them an open platform to perform. Rather to perform and be broadcasted because they might outshine India’s own talent pool. With the recent positive gesture of opening up to each other for trade, both Pakistan and India have a huge potential of their own to make use of. It would be better if their entertainment industries are not neglected in this regard while both the states exchange commodities. India can initiate this reception by not backing out in support of those who do make it across the borders.