For almost fifty years Pakistan had dominated the world of Squash. The era began with the great Hashim Khan who revolutionized squash with his fitness craze and ended with Jansher Khan.

Just imagine coming onto the scene when legendary Jahangir khan was at his prime and had just completed a record run of wins, remaining unbeaten.

But Jansher picked up where Jahangir Khan had left off. After JK senior, JK junior was in complete dominance of the squash world and rankings, winning the British Open six consecutive times! 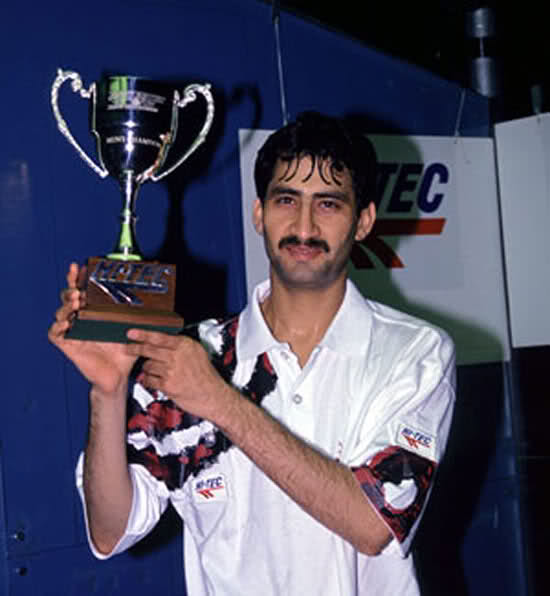 Still, JK junior had a completely different head on his shoulders; very different from JK senior.

Jahangir was of medium height with a shy and serious personality. The junior JK was the complete opposite; Tall, thin, undisciplined and humorous.

Like Jahangir, Jansher also belongs to a family of squash players. His brother, Mohibullah Khan, was also a top professional squash player (who unfortunately ended up in jail in the US on charges of drug possession).

Jansher however, was no less a champion than Jahangir. In the mid-1990’s Jansher was the only dominant player in squash.

Other than the six British Open titles that he won, he also has claim to a record eight World Open titles. WOW!

And the only reason he did not contest the 1997 Squash World Open was because he had a court order against him in Malaysia, where the event was being held.

Not just the two JKs but their rivalry: “JK vs JK” was also a hit, all the way! I couldn’t believe my eyes when the FIRST rally of their FIRST match in the 1988 World Open (held in Amsterdam) lasted 6 – yes, SIX – minutes and 15 seconds! But wait, the point, even after the whole SIX minutes was not awarded to anyone. It ended in a LET…. Do you have words? I don’t.

Officially, Jansher announced retirement from professional squash in 2001. His achievements include ninety nine titles (WOWEE!) and being ranked number one for more than six years.

There was a brief stint in 2007 when Jansher came out of retirement to play in the Professional Squash Association tournament. Although he claimed that he was mentally and physically fit to contest, he lost in the opening round.

His career was also more colorful (for a lack of a better word) than the senior JK.

For instance, coming back from London after his defeat in the first round of the Professional Squash Association tournament, he was caught in customs with illegal bottles of liquor. Thank God he didn’t follow in his brothers footsteps and end up in jail!.

Jansher’s 3-2 victory over Peter Nicol at the 1997 British Open was, according to some, the last burst. By now the King Khan was having serious knee problems, his fitness was not at the level it used to be, and in 2001 the King’s era was coming to a close.

Jansher Khan is ranked among the greats of squash and in my book he is a very close second to Jahangir Khan.