Lahore police has taken a great step by launching a GPS-aware complaint system for android devices. The application Rescue 15 will help users to lodge their complaints through an app. Supported with an embedded feature of GPS; the concerned department can track the whereabouts of the complainant. Subsequently, it will enable the department to take swift and prompt action against criminals.

Following are the 3 services that the app provides:

“This is the only GPS-enabled app in Lahore” 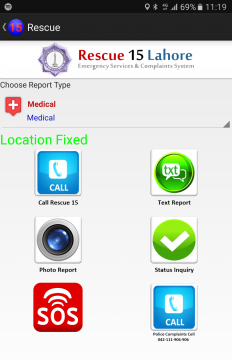 According to DIG Operations Dr. Haider Ashraf, the application was developed by Lahore police in collaboration with Punjab Information Technology Board (PITB).

The app was designed specifically by PITB to get rid of ‘thana culture’ in Pakistan. It is pertinent to mention that the app is developed by embedding the use of technology. In addition, Rescue 15 app will further strengthen the relation between the public and the police department.

A user needs to submit the following information to set up an account for authorization:

Innovative features of the app

Some of the key and interesting features of the app are:

 By using photo report, a complainant can click pictures of the incident
 Complainant can write down an entire report through text report
 An emergency button is also visible in the app
 A complainant can track the status of a particular complaint via status inquiry feature

According to the department of Lahore police, a user can notify about the intensity of the crime to the police by using a drop down menu which is available inside the application

Anyone who will misuse and report fake incidents will be dealt with strict action. Lahore police released this statement on the social media platform, Twitter.

It is important to make fair and proper use of the application. Do you think this initiative will decline the crime ratio in Pakistan?

Pakistan – The Other Side?